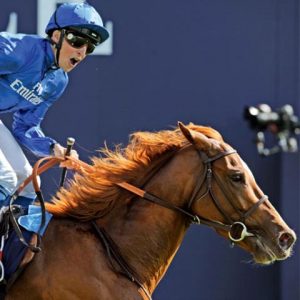 If Urban Sea, the dam of both Galileo and Sea the Stars, must be considered one of the greatest mares of our time, then what must we make of new stallion Masar’s pedigree? A grandson of Galileo (through New Approach), Masar is out of the Cape Cross mare Khawlah, bringing Green Desert and his genetic cornucopia into the mix, as well as a matching dose of Ahonoora found on the sires’ side, 3 x 4. Best of all, though, is that Masar is tail female Urban Sea, through her daughter by Lammtarra, Melikah, who fetched a then-record 1.5million € as a yearling. Masar’s pedigree, therefore, boasts Urban Sea, 3 x 4, and on the zigzag, as all of her profound genetic strengths should be carried on through this combination of one of her sons and one of her daughters. Masar stands at Darley’s Kildangan Stud in Ireland for 15,000£, a bargain price for a Group One winning millionaire with his unique pedigree.

Urban Sea’s pedigree is significant because it brings together both North American and European breeding in a complementary fashion. By Miswaki, an outstanding son of Mr. Prospector, who was out of the Buckpasser mare Hopespringseternal, the classic cross of Mr. P on Buckpasser, as seen in his other outstanding son Seeking the Gold, created the Group One millionaire and Broodmare of the Year Urban Sea’s sire line. Miswaki’s second dam, Rose Bower, was by the powerhouse broodmare sire Princequillo, and out of the Nasrullah mare Lea Lane. Thus, we have two doses of Nasrullah in close proximity in Miswaki’s pedigree, through Nashua, the sire of Golddigger, Mr. P’s dam, and Lea Lane. On Urban Sea’s dams’ side, we find, through Promised Lady, another thread to Princequillo’s sire, Prince Rose. In Masar’s dams’ side, there is another powerful Princequillo mare, Somthingroyal, dam of Secretariat and Sir Gaylord, through Sir Gaylord’s son Sir Ivor.

It would be remiss not to mention Masar’s third broodmare sire, the great, unbeaten, multiple Group One winning, millionaire Lammtarra. By Nijinsky II, out of the Blushing groom mare Snow Bride, Lammtarra must be considered the poster child for this classic cross and the brilliance it creates. Through Lammtarra, we get two doses of Northern Dancer, through Nijinsky II and Royal Statute, a daughter of Northern Dancer (another zig zag), making Masar 4 x 5 x 6 x 8 Northern Dancer, through some of his most prominent sons: Sadler’s Wells, Danzig, and Nijinsky II. It should also be noted that Khawlah is inbred, 6 x 6, to Blushing Groom’s sire, Red God.

Mares by numerous stallions would seem to be good matches for Masar, including Darshaan, Danehill, Shamardal, Sea the Stars (for more Green Desert and Urban Sea), and King’s Best. But my favorite match, for him, would be a Dubawi mare. Dubawi is unique in that he represents the first and only crop of Dubai Millennium, by Seeking the Gold. As previously mentioned, Seeking the Gold is three-parts brother to Miswaki, and his sire line has all but disappeared except for Dubawi and his sons. Dubawi also brings new threads of Northern Dancer to the pedigree, through Shareef Dancer and Lyphard, along with echoes of Masar’s own Never Bend (through Mill Reef in Dubawi) and Hail to Reason (through Roberto in Dubawi, and Bold Reason in Masar). A strand of Djebel complements the doubled Klairon in Masar, and adds to the strength of close genetic relative Turn-to in both pedigrees. Dubawi even has a Sir Ivor mare in his pedigree, Sweet Alliance, the dam of Shareef Dancer, twinning that dose that exists through Foreign Courier in Masar. With the popularity of Dubawi and his sons now at stud, a mare from this line would be an ideal mate for Masar.