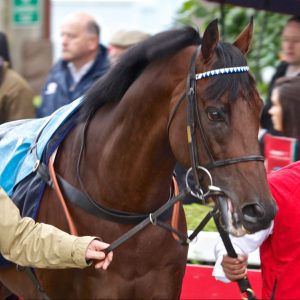 The improbable longshot winner of 2020’s York S.-G2 was Aspetar, by a relatively unknown sire, Al Kazeem, for whom he became the first group stakes winner. Elarquam, the prohibitive favorite, failed to fire, and Aspetar put on a grand show, winning by a length and a half. So the questions remain: who is Al Kazeem, and who is Aspetar?

Al Kazeem was no slouch on the race track, having won over £1,500,000 in group company. Aspetar is from his first crop, as he went to stud in 2014, and stands at Oakgrove Stud. But Aspetar is his only group winning offspring thus far, though he does boast a listed winner out of a Giant’s Causeway mare, and has several other winning offspring by Dansili and Dansili’s sire, Danehill, bred similarly to Aspetar, who is out of a Dansili mare. Nevertheless, his start at stud was relatively inauspicious until Apestar took the York S.-G2.

The key to his pedigree, however, is a curious one. His third dam is Treasure Chest, by Rough ‘n Tumble out of Iltis, a very North American strain of speed, toughness and grit, and also a full sister to the important North American mare My Dear Girl, the dam of In Reality, among many others. My Dear Girl is also an anomaly in the pedigree of the important sire Warning (1985), by Known Fact, whose sire was In Reality—there’s that dose of My Dear Girl figuring prominently. Warning, a Juddmonte-bred Group One winner, was out of the brilliant Roberto mare Slightly Dangerous, and there she is, in the fifth position, on the sires’ side, via her other important son, Deploy. Basically, Juddmonte re-created Warning with this clever pedigree, which includes another North American influence, Seeking the Gold. Aspetar is merely obeying his pedigree’s manifest by winning the York S.-G2, with his close genetic relationship with Warning visible in his five-generation pedigree.

Other important influences can be found in Aspetar’s pedigree. He is inbred 5 x 4 x 4 to Shirley Heights, whose sire was the wonderful race horse and influence Mill Reef, making him 7 x 6 x 6 Never Bend, giving him massive doses of Nasrullah and Never Bend’s influential dam Lalun, as well as Princequillo. He is, as well, 6 x 7 x 5 x 5 x 7 x 4 x 5 x 7 Northern Dancer, through a variety of sources such as Shareef Dancer, The Minstrel, Danzig, Nijinsky II (along with a complementary dose of Blushing Groom), Sadler’s Wells, and two doses, top and bottom, of Lyphard 6 x 8. The Buckpasser in Razyana, Danehill’s dam, reaches out to the Buckpasser in Seeking the Gold, and there’s even a second strand of Roberto in his dams’ side, through Sookera, making him 6 x 6 Roberto and 7 x 7 x 6 Hail to Reason (the last dose through Bold Reason on the dams’ side). There is also a building up of the close genetic relatives Turn-to and Djebel, top and bottom, plus a dose of Klairon, through Ahonoora, his fourth broodmare sire, adding stakes winning capability.

Aspetar won the Preis von Europa-G1 in new stakes record time before winning the York S.-G2, and his record is 13/4/2/2. Though he is a plain dark bay or brown gelding, blending in with all the other monotone dark horses in every race, this one bears watching. His pedigree would seem to predict future group wins, as he should continue to be tough and fast, thanks to North American Influences like Treasure Chest, Seeking the Gold, and Buckpasser, added to his collection of Northern Dancer influence.