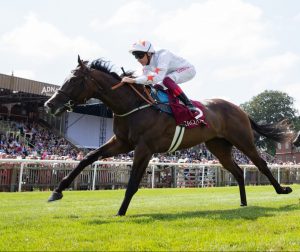 Advertise, beginning his career at stud at the National Stud in Suffolk, England, for a fee of £25,000, was a Group One winner at both two and three, winning the Phoenix S.-G1 at the Curragh, the Commonwealth Cup-G1 at Ascot, and the Prix Marcel de Gheest-G1 at Deauville, for a total of £904,357 in earnings. This jet-setting son of Showcasing has a pedigree of enviable balance, with multiple strains of Northern Dancer top and bottom, of Somethingroyal, dam of Secretariat and Sir Gaylord, top and bottom (7 x 8 x 7 x 8 x 6), of Mr. Prospector top and bottom, and, most interestingly, three doses of Northern Dancer’s son Lyphard, twice through his sons Lypheor and Dancing Brave, and once through his daughter Andaleeb.

His second dams on both the sires’ side and the dams’ side are near mirror images of each other, an unusual occurrence because both pedigrees are idiosyncratic. Arabesque, Advertise’s second dam and the dam of his sire, Showcasing, was by Zafonic. Sired by Gone West, he provides both Mr. Prospector and a Secretariat dam. Arabesque’s dam, Prophecy, was by Warning, a great genetic cocktail, as Warning’s sire’s side is that rarity in European pedigrees, the In Reality/Intentionally family, while his dams’ side features the speedy Slightly Dangerous, by Roberto, providing an important dose of Turn-to. Prophecy’s dam is the aforementioned Andaleeb, by Lyphard.

Now, in examining Advertise’s second dam, Red Tiara, on his dams’ side, we see many of the exact same elements, combined slightly differently. Red Tiara was by Mr. Prospector himself, and by the Lypheor mare Heart of Joy. It should be noted that Lypheor, of course by Lyphard, was out of a granddaughter of Klairon, a close genetic relative of Turn-to, who also appears through every dose of Somethingroyal’s son, Sir Gaylord (6 x 7 x 7) in the pedigree. Heart of Joy’s dam, Mythographer, was by Secretariat, just as Gone West’s dam was. The coup de grace, however, lies in Mythographer’s dam, Arachne: a daughter of Intentionally, who appeared in Arabesque as well, through a son, while here the appearance is through a daughter, creating the valuable zigzag. This rarity of intense twinning can’t be underestimated, and suggests a bold possibility for potential mates for Advertise (see diagram).

The perfect mare for Advertise? A daughter of Tapit, out of a Giant’s Causeway mare. Tapit features three doses of the In Reality/Intentionally family, twice through In Reality daughters, and once through a daughter of Dr. Fager, as well as Nijinsky II, twice, who is missing from all of the Northern Dancer crosses in Advertise. We get another dose of Somethingroyal, through the Secretariat mare Weekend Surprise, and we add to Klairon and Turn-to their other close genetic relative, My Babu, in that trio that seems to guarantee racing success.

Storm Cat loves added Nijinsky II, as they are closely related, making a Giant’s Causeway second dam utter perfection, because he also provides Nijinsky II’s other ideal complement, Blushing Groom, through Rahy. Add another dose of Turn-to, through Halo (whose dam, Cosmah, also complements all the strains of her half-sister, Natalma, the dam of Northern Dancer), and note that the Cozzene in Advertise’s pedigree also complements perfectly the Unbridled in Tapit, a similar cross having created one of Unbridled’s best sons, Unbridled’s Song. In fact, if the third dam of this imaginary mare were by Unbridled’s Song, it would only contribute to the strength of the pedigree.

Advertise’s pedigree is lacking in many of the most notable strains of Northern Dancer found in UK broodmare sires, so his appeal should be great for such as Galileo and sons and grandsons, other strains of Danzig than Green Desert, No Nay Never mares, etc., as well as daughters of the Machiavellian line, providing more Mr. Prospector.

But there must be a breeder who happens to own that Tapit/Giant’s Causeway mare to take to Advertise, to create a foal with the brilliance of Giant’s Causeway, coupled with the toughness of Seattle Slew and In Reality. Talk about an iron horse!