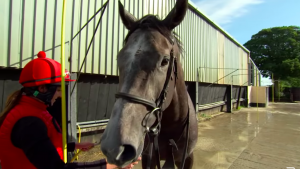 Champion Three-Year-Old Filly in Europe and four-time Group One winner Alpha Centauri did indeed shine like a star during her racing career. Bred and raced by the Niarchos Family and their Flaxman Holdings Ltd., the gorgeous gray was incomparable in both race record and pedigree, as she comes from the best Niarchos family, which is also one of the most important in the stud book.

In 2019, she was bred to—who else—Galileo, and in April foaled a glorious chestnut colt by the world’s leading sire. Having had experience with gray mares that foal chestnut babies, I’d wager that this colt will turn gray by the time he’s two, as Alpha Centauri has powerful gray blood in her dams’ side, through Caro and Black Tie Affair.

Alpha Centauri is by Mastercraftsman, a son of Danehill Dancer. Mastercraftsman mares have only produced two Galileo foals, and neither has shown an ounce of run, as both are non-winners. At first glance, then, one might wonder why this magnificent filly was taken to Galileo, other than that she deserved the best. But by looking a generation or two back, one finds one of Galileo’s best nicks, with Danehill Dancer, Mastercraftsman’s sire, and with Danehill himself, his grandsire.

One name expresses the richness of this cross: Frankel. Indeed, Galileo has 19 Group One winners out of mares by either Danehill Dancer or Danehill, and Frankel (and his brother Noble Mission, who has made an early success at stud in the United States) aren’t the only stand-outs. Such horses as Highland Reel, Maybe, Minding, Roderic O’Connor, Tapestry and Teofilo populate the stellar list. It should also be noted that Alpha Centauri’s second dam is by Rahy, and Galileo has a Group One winner, Galikova, out of a Blushing Groom mare.

The real key to Alpha Centauri’s pedigree, however, is her Blue Hen third dam: the great Miesque herself, two-time winner of the Breeders’ Cup Mile-G1, and dam of classic sire Kingmambo, among others. She must be considered one of the great race mares and broodmares of the twentieth century.

To begin to understand the profound strengths in this colt’s pedigree, one need only examine the pedigree of another daughter of Galileo, Group One winner Tapestry, bred by Orpendale (a Coolmore associate) and the Niarchos Family. Tapestry’s sire is Danehill, and her third dam is Miesque, making her very closely related to the new foal. So Galileo on the tail female family Miesque represents clearly works.

Tapestry’s second dam is Monevassia, by Mr. Prospector out of Miesque, and Mastercraftsman adds a dose of Mr. P as well, through the MIswaki son Black Tie Affair, giving this colt a double dose of Miswaki, through his daughter Urban Sea in Galileo, and his son Black Tie Affair in Alpha Centauri (note this first example of the zig zag cross).

As we usually note in top race horses, multiple doses of certain great mares make these pedigrees, and Alpha Centauri’s is the same, with multiple strands of La Troienne through Buckpasser and The Axe II, and through the two daughters of Almahmoud, Natalma (dam of Northern Dancer), and Cosmah (dam of Halo), and these five doses of Natalma include on through a daughter, Spring Adieu, making this pedigree on a very rare zig zag that brings together the best in both male and female DNA.

But here’s the real trick of this splendid pedigree. Miesque is by Nureyev, who is tail female Rough Shod II (1944), another of the true Blue Hens of twentieth century mares, through his dam, Special, a daughter of Thong, out of Rough Shod II. Special is also the dam of Sadler’s Wells’ dam, Fairy Bridge, on the sires’ side, making this remarkable colt 4 x 6 Special, and, of course, on the zig zag. American breeder Bull Hancock purchased Rough Shod II in 1951, in foal to My Babu, for $10,000—the bargain of the twentieth century.

Without doubt, this colt would seem to be a star of the future. I would bet he will never set foot in an auction ring, but will set foot many times in Group One winners’ circles. No news on which stallion Alpha Centauri will be bred back to yet: stay tuned. One shouldn’t be surprised if she returns to the magnificent Galileo, for another pedigree masterpiece.