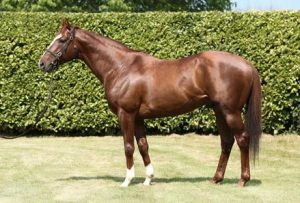 Anna Law is the dam of the “fastest horse in the world.” Battaash, the now six-year-old gelding out of Anna Law, by Dark Angel, won the Nunthorpe S.-G1 at York in record time, beating the great Dayjur’s 29-year-old record that seemed as if it would stand forever. His yearling sister sold to Shadwell for 800,000 guineas in October of 2019. Shadwell was also the purchaser of the yearling Battaash. Clearly this is a family to watch.

The pedigree of Anna Law is interesting, as she is by Lawman. He represents the classic cross of Northern Dancer on Mr. Prospector, with two doses of Never Bend, through a son and a daughter, added in, and two powerful doses of Princequillo, also through a son and a daughter. What’s unusual about this combination is not that the Northern Dancer comes through the ubiquitous Green Desert and Nijinsky II, but that the Mr. Prospector comes through that North American dirt speedster Gulch. If ever a horse looked like a dirt sprinter, it was Gulch, with his short back, expansive chest and huge hindquarters. His appearance in this European pedigree is a surprise.

Her dams’ side adds another dose of Northern Dancer through her broodmare sire, Night Shift, and, more significantly, provides the Blue Hen mare Best in Show through her son, Malinowski, by Sir Ivor, adding to the build-up of Princequillo blood through Somethingroyal, making Anna Law 7 x 7 x 7 Somethingroyal.

Dark Angel duplicates the Northern Dancer/Mr. Prospector cross found in Anna Law, with Northern Dancer appearing through Try My Best (who also provides a doubling of La Troienne, who appeared in Anna Law’s pedigree via Mr. Busher, and appears here through Buckpasser) and Night Shift, and Mr. Prospector via Machiavellian, whose Halo dam and Hoist the Flag second dam also provide rogue strains of Cosmah and Natalma, those powerful half sisters who appear in every dose of Northern Dancer. This doubling of Nightshift is both a curious and a bold pedigree choice for Battaash, which clearly worked.

This year, Ballyphilip Stud is sending its star mare Anna Law to the red-hot Lope de Vega. Clearly, the brain trust here is committed to a twinning of the Northern Dancer/Mr. Prospector cross found in Battaash, but with a twist. Lope de Vega is double-bred Machiavellian, 3 x 3, on the zig zag, so it seems clear that those extra doses of Almahmoud through her daughters Cosmah and Natalma are felt to be the magic trick that pulls the rabbit out of the hat. More than this, though, the Northern Dancer in Lope de Vega is via his grandfather, Giant’s Causeway, by Storm Cat (out of the Secretariat mare Terlingua, bringing in another dose of Somethingroyal through her most powerful incarnation), out of the Rahy mare Mariah’s Storm, providing yet more Halo, more La Troienne, and, most importantly, Blushing Groom, which creates the perfect race horse nick with the Nijinsky II in Anna Law, and, for good measure, the Nijinsky II in Lope de Vega’s dams’ side. There is also an extra dose of Somethingroyal through Sir Ivor, giving this potential foal profound inbreeding to Somethingroyal and Princequillo (another dose of whom appears via Vettori’s fourth dam, Quill).

This potential foal represents a cross that works for Anna Law, the Northern Dancer/Mr. Prospector cross, via important sires, but also features terrific inbreeding to Blue Hen mares Somethingroyal, Almahmoud and La Troienne. I can’t wait to see it go through an auction ring in 2022. I’m guessing the representative from Shadwell will be raising his hand.