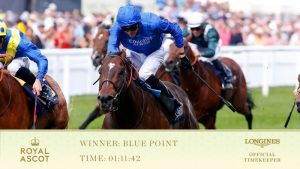 Blue Point, new for 2020 at Darley’s Kildangan Stud in Ireland, now stands with his sire, the red hot Shamardal, for €45,000. A four-time Group One winner, who won Group stakes at 2, 3, 4 and 5, Blue Point boasts an interesting, outcross pedigree that should make him successful with a wide variety of mares, much as another son of Shamardal, Lope de Vega, has proven remarkably successful with a variety of mares due to his outcross pedigree.

Shamardal is by Giant’s Causeway, out of the full sister to the great Street Cry, Helsinki, providing the classic Storm Cat/Mr. Prospector cross. But there is so much more of interest in his pedigree: for example, he is 5 x 4 Halo, through Rahy and Coup de Folie, with another dose of Hail to Reason thrown in through Roberto, and balanced by the presence of closely related Blushing Groom and Riverman (who also provides the only dose of the usually ubiquitous Never Bend). Coup de Folie is a genetic masterpiece in her own right, as, being by Halo, her pedigree features Almahmoud’s daughter Cosmah, while her dam, Raise the Standard, by Hoist the Flag, a grandson of stamina influence Ribot, is out of Natalma, Almahmoud’s other influential daughter. Natalma, by Native Dancer, underscores both the importance of Native Dancer in this pedigree, and draws in every dose of Northern Dancer, also by Natalma, in this pedigree, as Blue Point is 5 x 5 Northern Dancer.

What is fascinating, though, is where these doses of Northern Dancer come from: Storm Bird and Try My Best. Blue Point is, thus, entirely free of the dominant strains of Northern Dancer found in European pedigrees, most notably Danzig and Nijinsky II, but also Galileo, Sadler’s Wells, Nureyev, etc. The single thread of Never Bend, through Riverman, also makes Blue Point ideal for the many mares with Green Desert in their pedigrees (by Danzig, out of Foreign Courier, by Sir Ivor, who was out of the greatest Never Bend mare ever, Courtly Dee), and these mares are everywhere, as well as mares featuring Mill Reef, with his dominant dose of Never Bend. A mare with both of these strains of Never Bend would be ideal for Blue Point. Blue Point’s pedigree also features multiple doses of Turn-to and Djebel, making mares featuring Irish River and Lorenzaccio, with their dose of Klairon, ideal.

It is worth noting that both Shamardal and his son Lope de Vega have sired group winners with daughters of the North American stallion Unbridled’s Song, Emotionless and Puissance de Lune for father, Zabeel Prince for son. Though Unbridled’s Song was primarily a dirt influence in America, the presence in his pedigree of both Le Fabuleux and Caro suggest that when mated with a turf influenced sire, such success should indeed be possible. As well, his dose of Buckpasser complements the Buckpasser in Sex Appeal, the dam of Try My Best (and also his magnificent brother, El Gran Senor).

Lope de Vega is inbred 3 x 3, top and bottom, to Machiavellian. Because of this, I wouldn’t hesitate to bring a Street Cry daughter or granddaughter to Blue Point, to further enrich what Helsinki brings to Blue Point’s pedigree.

All in all, the potential for Blue Point seems limitless. There isn’t a notable broodmare sire that I can think of that wouldn’t work well with him, and all of the predominant strains present in the vast majority of broodmares will complement his pedigree. Blue Point is a new stallion to watch and breed to, before his fee skyrockets as Lope de Vega's has.