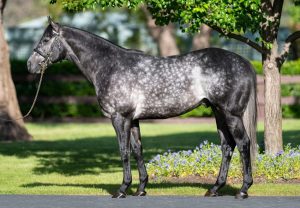 In the first session of Goffs November Foal Sale, a colt by Coolmore’s first crop sire and son of Scat Daddy, Caravaggio, fetched £100,000 to become the top lot. I could write a book about this weanling’s pedigree, as its depth and cleverness are profound, in both European grass and stamina breeding, and North American dirt and speed breeding, giving this colt the potential to achieve at longer distances than his sprinting sire. Peter and Ross Doyle’s purchase of this colt demonstrates and underscores their awareness of the uniqueness of this pedigree.

Caravaggio won Group One sprint races at both two and three (the Phoenix S.-G1 at the Curragh, and the Commonwealth Cup-G1 at Ascot), and he was named Top Rated Three-Year-Old Sprinter of 2017 in Ireland, and completed his career with earnings of 724,463 pounds. Though he resembles his great sire Scat Daddy in conformation, his anomalous coloring for a Scat Daddy comes from his very gray dams’ side, which includes closely related North American sires Holy Bull and Relaunch.

His dam, the black-type winner Mekko Hokte, is by Holy Bull, out of the Relaunch mare Aerosilver, providing intense inbreeding to the family and close genetic relatives of In Reality, a North American influence of dirt speed, through Holy Bull’s sire Great Above (by Minnesota Mac, a son of Rough’n Tumble, our of the rapid Ta Wee, a daughter of Intentionally). In Reality, Relaunch’s sire, is by Intentionally, out of the Rough’n Tumble mare My Dear Girl. Great Above and In Reality therefore share huge pedigree similarities, though on the zigzag, making this inbreeding all the more powerful. Adding to this is the presence of The Axe II, through Holy Bull’s dam, Sharon Brown, and Relaunch’s dam, Foggy Note, also on the zigzag, as Sharon Brown is by The Axe II’s son, Al Hattab, while Foggy Note is a daughter of The Axe II himself.

What is notable about The Axe II’s pedigree is that he is a son of Mahmoud, one of the strongest stamina influences of the twentieth century as well as being the source of perhaps 90% of gray coloration in today’s thoroughbreds, and out of the mare Blackball, a granddaughter of one of the greatest Blue Hen mares of the twentieth century, La Troienne. It should be noted that Gonfalon, another greatly influential mare in Caravaggio’s pedigree and the dam of Ogygian, Johannesburg’s broodmare sire, features a dose of Big Event, Blackball’s dam, and a daughter of La Troienne.

Also significant and worth noting in Caravaggio’s pedigree are two doses of Nijinsky II, a close genetic relative of the young stallion’s fourth sire, Storm Cat, and two doses of Mr. Prospector, all four of these through daughters. This cross of Scat Daddy on Holy Bull mares has only been attempted six times, resulting in eight foals, seven starters, six winners, and three black type winners, achieving an Average Earnings Index of a whopping 4.13, compared to Scat Daddy’s AEI in general of 1.86, still well above what is considered a good AEI of one. Clearly, this cross of Scat Daddy on Holy Bull mares bears exceptional results.

The Caravaggio colt is out of the Cape Cross mare Cape Joy, who has produced one multiple winner from four to race, but her pedigree is the perfect complement to Caravaggio’s, working magic. Cape Cross’s sire is the ubiquitous Green Desert, providing inbreeding to Northern Dancer through Danzig, adding to Northern Dancer’s presence in the sire’s side through Storm Cat and Nijinsky II.

Remember, though, that every dose of Northern Dancer contains Mahmoud’s daughter and Northern Dancer’s dam, Natalma. This colt’s pedigree therefore contains an amazing amalgam of the 1933 horse Mahmoud through his sons, daughters, and close genetic relatives such as Mumtaz Begum, Nasrullah’s dam and three parts sister to Mahmoud.

Nasrullah provides another key, as he is closely related to the stakes-producing combination of Klairon, Ambiorix, My Babu, and Turn-to, all of whom appear in this pedigree in a rare recipe. As well, other doses of Djeddah, Djebel and Tourbillon, the forebears of Klairon, Ambiorix and My Babu appear. Combining two or three of these closely related sires creates stakes winners, but a pedigree combining all four plus so much Nasrullah would seem to guarantee this colt the chance to be a serious runner.

I frequently harp on the importance of the 1912 Spearmint mare Plucky Liege, but that is only because her sons and daughters continue to influence the contemporary thoroughbred, and in the best race horses one can see a build-up of her offspring in the periphery of their pedigrees, the more the better.

The strongest combinations of these offer mulltiples of Plucky Liege’s offspring. She had seven foals, and this pedigree contains five of them—four sons, the full brothers Bull Dog and Sir Gallahad III, both by Teddy; Admiral Drake, by Craig an Eran; Bois Roussel, by Vatout; and, most significantly, and most rare, Bull Dog’s and Sir Gallahad III’s full sister, Marguerite de Valois, the key to passing on Plucky Liege’s big heart gene, which can only be transmitted by mares. There are at least 15 crosses to this family in the colt’s pedigree.

Lest we forget, the Nijinsky II/Blushing Groom nick is reeled in through Rainbow Quest, the sire of the colt’s second dam, Perils of Joy. As well, the colt is triple-bred Herbager, a powerful stamina and grass influence, and has other strains of Teddy, the sire of three of the abovementioned offspring of Plucky Liege, notably through the previously noted Blue Hen La Troienne, a daughter of Teddy, who appears multiple times, through sons and daughters, in this pedigree.

I will stop myself from going on, as there is so much more to love about this pedigree. Suffice it to say that the 100,000 pound price tag on this handsome colt may indeed appear to be a bargain two years from now, if a pedigree nerd’s opinion means anything.