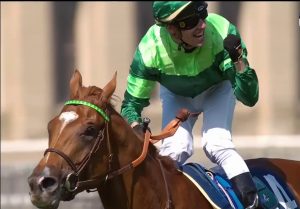 When Coolmore acquires a 50% interest in a race horse/stallion prospect, people listen. The announcement, on January 17, that Sottsass, winner of the Group One Prix du Jockey Club in record time last year, is now co-owned by Peter Brant’s White Birch Farm and Coolmore piqued my curiosity. Sottsass is a half sibling to Brant-owned Champion Sistercharlie, and Brant has been on a crusade to monopolize the offspring of the Galileo mare Starlet’s Sister since acquiring the brilliant mare. Clearly a wise move, as Sottsass now has a world class spot at stud once he retires, with the entire Coolmore machine behind him.

Sottsass is by Siyouni, and out of the above-mentioned Galileo mare, a cross which yields an AEI of 8.74, very high, though my suspicions indicate that Sottsass is primarily responsible for that number, just as he is responsible for £1,396,498 of the approximately £2million in earnings for that cross. Sottsass was third in last year’s Prix de le Arc de Triomph-G1 behind upset winner Waldgeist, and favorite Enable, though the latter two were older horses, while Sottsass was the only three-year-old to hit the board. If his racing success continues in his four-year-old year, Coolmore should have a very hot prospect in him indeed.

The North American influences of Mr. Prospector and Buckpasser are the most fascinating aspects of Sottsass’ pedigree. On his dams’ side, he is inbred 4 x 4 to Miswaki, through that sire’s greatest daughter, Urban Sea, the dam of Galileo, and the mare Alwaki. We’ve seen inbreeding to Urban Sea herself work well for racing and at stud, but this particular double-dose of Miswaki is rare. Miswaki was by Mr. Prospector, out of the Buckpasser mare Hopespringseternal, whose dam was the Princequillo mare Rose Bower.

Examining Siyouni’s pedigree, one finds a similar coupling, of the Buckpasser mare Spring Adieu (whose dam was Natalma, also the dam of Northern Dancer) and the Mr. Prospector son Conquistador Cielo, making Siyouni’s dam, Sichilla, closely related to the Miswaki mares in Sottsass’ dams’ side. This also enhances the multiple doses of Northern Dancer in this pedigree (5 x 5 x 4 x 7), giving us therefore five doses of Natalma, whose sire, Native Dancer, also complements all of the Raise a Native in Mr. Prospector. We have a doubling, top and bottom, of the great mare Special, through her son Nureyev on the sires’ side, and her daughter, Fairy Bridge, on the dams’ side, the iconic zig zag. As noted in a previous examination of a son of Siyouni, Siyouni presents three of the four important, closely related sires from the forties and fifties, Turn-to, Ambiorix, and My Babu.

When Sottsass goes to stud, he will be a natural with any mares featuring the fourth member of the Fab Four, Klairon, offered through Irish River, Lorenzaccio and Luthier, among others. One more interesting aspect of Siyouni: his fourth dam, Carrie’s Rough, was by Rough ‘n Tumble, another nod to North American breeding that makes Sottsass a valuable partner for many North American broodmare sire lines, as Fappiano, from that same line, is ubiquitous in North American breeding, and potent.

Three broodmare sire lines immediately come to mind for Sottsass when he retires: Dubawi, Sea the Stars, and Unbridled’s Song. All three reinforce the Mr. Prospector/Buckpasser strength, the first through Miswaki’s close genetic relative Seeking the Gold, the second through yet another dose of Urban Sea herself, and the third via Mr. Prospector/Fappiano/Buckpasser, with the addition of another dose of Caro and one of Le Fabuleux. The appearance of Nijinsky II in Sottsass’s dams’ side yearns for Blushing Groom to be added to it, and both of these complement any Storm Cat line broodmare sire, though especially sons and grandsons of Giant’s Causeway.

One more interesting fact about Sottsass: he is named after the architect and designer Ettore Sottsass, whose famed Memphis Group, working out of Milan, changed the face of design much as Andy Warhol changed the face of art. Sottsass formed the Memphis Group in 1981, and their colorful, whimsical, assymetric furniture and other household items are prized to this day. The horse Sottsass has a big name to live up to. I can’t wait to see what the creative Coolmore crew comes up with to advertise his debut at stud, utilizing his namesake’s wonderful creations.