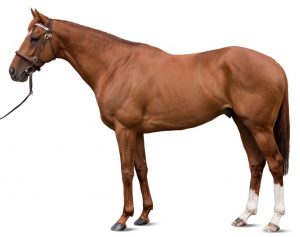 After missing the entire racing year of 2018, Magic Lily is back, and she is the queen of Meydan Racecourse. She won the Cape Verdi S.-G2 on January 16, 2019, and came back to take the Balanchine S.-G2 on February 13, 2019, demonstrating that she has returned with a vengeance, bringing her record to six starts, three wins, a second and a third. The Godolphin bred and owned New Approach filly is being pointed to a Group One race on World Cup Day, so enamored of her progress is her trainer, Charlie Appleby.

Her sire, New Approach, a son of Galileo, was Champion Two-Year-Old and Three-Year-Old Colt in Europe, and was a multiple Group One winner (including the Epsom Derby) of nearly two million pounds. He stands at Godolphin’s Dalham Stud for £30,000, making Magic Lily a true home bred. She is out of the Epsom Oaks-G1 winner Dancing Rain, whom Godolphin acquired at the Tattersalls December 2013 sale for a cool four million guineas, so Magic Lily’s bona fides as a potential Group One winner herself are in place.

Magic Lily’s pedigree is a thing of beauty. It boasts two of the greatest Buckpasser mares ever, top and bottom: Miswaki’s dam, Hopespringseternal on the sires’ side, and Spring Adieu, the dam of Razyana, who gave birth to the immortal Danehill, on the dams’ side, making Buckpasser a balanced 6 x 6 in Magic Lily. Two other eye-catching twinnings exist: Ahonoora, 3 x 4, providing a double dose of Klairon on the zig zag, complementing multiple doses of Djebel and Tourbillon, and Northern Dancer, 4 x 5 x 5, both top and bottom, through Sadler’s Wells, Danzig, and, on the zig zag, a daughter, Rose Red. Spring Adieu’s dam, Natalma, also the dam of Northern Dancer, improves the aforementioned zig zag.

A look at New Approach’s best progeny yields one mystifying result. Aside from his matings with the usual suspects from the Northern Dancer and Mr. Prospector lines, two of his best offspring, both of whom stand at stud, are Dawn Approach and Herald the Dawn, full brothers, both out of the Phone Trick mare Hymn of the Dawn. Phone Trick? Really? Has any other stallion so epitomized North American dirt precocity? Remember his Two-Year-Old Champion son, Favorite Trick, who sadly perished in a barn fire? And now, even in North America, his line has all but disappeared.

The key lies elsewhere. Hymn of the Dawn’s dam was Colonial Debut, by Pleasant Colony, a son of His Majesty and grandson of Ribot. This sheds light on Magic Lily’s pedigree, because Danehill’s dam, Razyana, was by His Majesty, and it turns out that Dancing Rain’s third broodmare sire is none other than Alleged, himself a great grandson of Ribot, making Magic Lily, on her dams’ side, 6 x 7 Ribot. These two doses of Ribot stamp Magic Lily with stamina, and the filly miler has demonstrated that twice already in 2019, a very young year yet.

Racing fans always look forward to Dubai World Cup day, with its stellar line-up of races and race horses, but beautiful, chestnut Magic Lily adds to the luster of that stellar day.