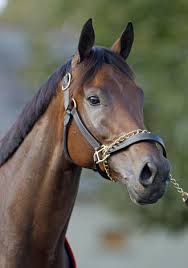 Donna Veloce catapulted herself to the top of the ranks of Kentucky Oaks contenders with her brilliant win in the Santa Ysabel S.-G3 on March 8. Despite a stumbling start and being behind four other fillies, she made her move around the clubhouse turn and took off, leaving the others in her dust. Her record is now four starts, two wins and two seconds, for earnings of $490,000. The fact that she was a $450,000 Keeneland September 2018 yearling and a $800,000 Fasig-Tipton Florida March two-year-old attests to her promise and good looks, and she is drop dead gorgeous. She’s unusual for an Uncle Mo, as she is so elegant and feminine—he tends to throw big, butch offspring, as that’s what he is. But she is leggy and wasp-waisted, with a beautiful head, and an effortless stride.

Her pedigree represents a classic Uncle Mo cross, with cherries on top (and bottom). She is out of the Montjeu mare Coin Broker, and her second dam is Cash Run, by Seeking the Gold. One need look no further than Uncle Mo’s best son and promising young sire, Nyquist, to find the same template. Nyquist is 6 x 6 x 4 Northern Dancer, out of a Forestry mare (note the extra dose of Myrtlewood present, tail female, in Forestry), with a Seeking the Gold second dam. Donna Veloce is 5 x 4 x 4 Northern Dancer, out of a Seeking the Gold second dam. Indeed, the presence of multiple doses of Northern Dancer, and sons of Mr. Prospector/Fappiano with Buckpasser on their dams’ side (Mining, Empire Maker, Unbridled) are everywhere in Uncle Mo’s best offspring, as are notes of In Reality/Dr. Fager, which Donna Veloce also offers as her fourth broodmare sire is Dr. Fager himself.

But back to Nyquist, and his double-dose of tail female Myrtlewood, through Forestry and Mr. Prospector. Myrtlewood (1932) is the tail female of both Seattle Slew and Mr. Prospector, as well as Forestry, part of what makes the Seattle Slew/Mr. P cross so potent. Missing entirely from Uncle Mo’s pedigree, single and double doses of Myrtlewood dot the pedigrees of Uncle Mo’s best offspring, through A.P. Indy and Bernardini as well as all of the Mr. P crosses. Donna Veloce herself is double-bred tail female Myrtlewood: through Mr. P, of course, but through her own female line, as she herself is tail female Myrtlewood, being double-bred Sequence, the dam of Gold Digger, Mr. P’s dam, who is also her fifth dam, making Donna Veloce 6 x 6 Sequence and therefore 8 x 8 Myrtlewood.

Another Blue Hen mare makes a twinned appearance in Donna Veloce’s pedigree: the great Grey Flight (1945), responsible for so much black type in the thoroughbred it would take pages to list it all, though it includes What a Pleasure, Bold Lad, and the only mare to give birth to two millionaire fillies, Pure Profit, the dam of both Educated Risk and Inside Information. Like Myrtlewood, the important tail female relative in Grey Flight is La Grisette (1915), the great grandmother of Grey Flight, and a profound influence on the thoroughbred breed. Donna Veloce is 7 x 8 Grey Flight, top and bottom, through Sovereign Dancer in Uncle Mo’s pedigree, as she is Sovereign Dancer’s second dam, and through Pleasant Colony’s dam, Sun Colony, on her dams’ side. Sun Colony was by Sunrise Flight, a grandson of Grey Flight through his dam, Misty Morn.

Lest we forget, another Blue Hen is featured in Uncle Mo’s pedigree, via his broodmare sire Arch, a great grandson of Courtly Dee (1968), through her granddaughter Aurora, by Danzig, making Aurora a close genetic relative to the breed-shaping sire in Europe, Green Desert. We also must not forget the strong dose of La Troienne (1926), via Buckpasser, and Special, the scion of another great female family, that of Rough Shod II (1944).

This pedigree is an encyclopedia of great female families, missing only that of Somethingroyal, Secretariat’s dam. Clearly, the more mare power you can add to Uncle Mo, the better. It’s amusing to note that one nicking service that shall not be named here gave this pedigree an F grade, a testament to some nicking services’ inattention to female families, and complete, doglike devotion to male lines only. Some pedigree experts believe that the strength of female families accounts for more than 50% of a race horse’s ability. Though this seems an oversimplification to me, given the roulette wheel of genetic diversity, to discount the importance of great female families demonstrates a complete lack of subtlety in pedigree analysis. Uncle Mo and Donna Veloce are proof of this, as their pedigrees are as subtly brilliant as any in the stud book.