Dragon Pulse Filly I’ll Have Another To Visit Ten Sovereigns 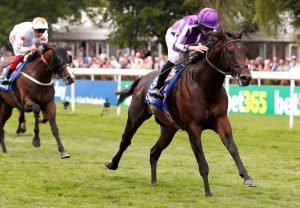 The sales topper at the recent Tattersalls February 2020 Sale was the listed winner I’ll Have Another, a four-year-old filly by Dragon Pulse, a son of Kyllachy who stands at the Irish National Stud for only £6,000. But bidding was intense for his beautiful daughter, and bloodstock agent Cormac McCormack took her home for 200,000 guineas.

Shortly thereafter, it was announced that I’ll Have Another will be bred to Ten Sovereigns, a new stallion for 2020, standing at Coolmore Ireland. A son of the super-hot No Nay Never, his fee of €25,000 represents good value for such a brilliant sprinter and winner of Group One races at two and three, the Middle Park S.-G1 and the July Cup-G1, who was as well named European Champion Three-Year-Old Sprinter in 2019. Ten Sovereigns had an unbeaten two-year-old campaign, including an eye-catching debut at the Curragh that he won by nine lengths.

The resulting foal will also be 4 x 4 Danehill, through his sons Exceed and Excel in Ten Sovereigns’ pedigree, and Dylan Thomas in I’ll Have Another’s. The dams’ sides of these two, however, are completely different, much as the inbreeding to Nureyev presented. Exceed and Excel was out of the Lomond mare Patrona. Lomond was by Northern Dancer, and out of Seattle Slew’s dam My Charmer, thereby doubling the My Charmer (6 x 7) in the prospective foal, because of the presence, as previously mentioned, of Capote in Ten Sovereigns. Dylan Thomas was out of the Diesis mare Lagrion. Diesis also makes an appearance in I’ll Have Another’s sires’ side, making the prospective foal 6 x 5 Diesis, providing Diesis’ rogue dose of Native Dancer added to the more usual doses of him through Mr. Prospector, appearing twice in No Nay Never, and once through Ten Sovereigns’ fourth dam, My Darling One, by Exclusive Native, all representing quite an array of different strains of Native Dancer. One must remember, as well, that Northern Dancer himself was the son of the Native Dancer mare, Natalma.

The great Damascus appears, top and bottom, 7 x 7, through his granddaughter Myth in the foal’s top side, and his daughter Continual, dam of Shadeed, in the bottom side. And of course—broken record time—the multiple doses of Secretariat’s dam, Somethingroyal, must be noted. She appears through Storm Cat’s Secretariat dam, Terlingua; through Gone West’s Secretariat dam, Secrettame; through Elusive Quality’s Sir Ivor second dam, Ivory Wand (Sir Ivor being by Somethingroyal’s son, Sir Gaylord; and, pulling it all together, through I’ll Have Another’s third dam, Klarifi, by Habitat, a son of Sir Gaylord as well, plus an almost hidden cameo by Drone, another son of Sir Gaylord, broodmare sire of Dragon Pulse’s fourth dam.

This foal clearly has a subtle, nuanced pedigree, full of mirror images and shadows upon shadows. Someone did some serious homework to design this mating, and is deserving of kudos. And it is a coup for a new stallion to add such a mare to his first book. Everyone wins. I can’t wait to see the foal.