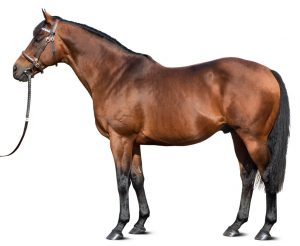 Think of what Ghaiyyath must have looked like as a baby! The Group One winner fetched €1.1 at Goffs November 2015 Sale as a weanling, purchased by John Ferguson for Godolphin; one can only guess at the Coolmore underbidder. Clearly, the son of Dubawi has always been a head-turner, and on February 20 he came back from a lay-off to win the Group Two Dubai Millennium S. at Meydan by 8 ½ lengths, with William Buick up, trained by Charlie Appleby. Will he be entered in the Dubai World Cup, or another stakes race on that day? The horse has a pedigree to match his good looks, and seems bound to end up standing alongside his stellar sire at Godolphin’s Dalham Hall Stud at the end of his racing career.

By Dubawi, Ghaiyyath is out of the Galileo mare Nightime, a cross creating a 4.33 AEI, higher than Dubawi’s across-the-board AEI of 2.55, already impressive and indicating that sire’s strength with mares of every stripe. Dubawi was by the ill-fated Dubai Millennium, while Nightime (winner of the Group One Irish 1000 Guineas in 2006) is by Galileo, and it is striking how closely related Dubai Millennium and Galileo are, albeit on the zigzag. Dubai Millennium was by Seeking the Gold (by Mr. Prospector, out of a Buckpasser mare), while Galileo is out of Urban Sea (by Miswaki, who is by Mr. Prospector, and out of a Buckpasser mare), making Seeking the Gold and Miswaki closely related (and Ghaiyyath 4 x 5 Mr. Prospector). Galileo, by Sadler’s Wells, is a grandson of Northern Dancer, while Dubai Millennium’s dam is a granddaughter of Northern Dancer. This creates the classic zig-zag cross in the sire line and broodmare sire line—no wonder the AEI for this cross is so spectacular. Ghaiyyath is inbred 5 x 6 x 4 x 6 to Northern Dancer, twice in his sire line and twice on his dams’ side, creating more balance, top and bottom, through entirely different sources: Shareef Dancer, Lyphard, Sadler’s Wells, and Storm Bird. Another striking balance is that Ghaiyyath’s sire line boasts 6 x 7 Sir Gaylord, through Sir Ivor and Drone (and, of course, inbreeding to Somethingroyal because of that), while his dams’ side is 7 x 7 Sir Gaylord, through two doses of Sir Ivor.

But by far the best magic trick in this pedigree is inbreeding, 5 x 6, to the full siblings, the great mare Special, and the great stallion Thatch. Both were by Forli, and out of Thong, a daughter of one of the twentieth century’s true Blue Hens, Rough Shod II. Rough Shod’s influence on the breed cannot be questioned, but the power of this close inbreeding through a grandson and granddaughter ensures that all of Rough Shod’s undoubted strengths will be passed on, because of the differing genetic power that exists on the X chromosome (from male offspring) and the Y chromosome (from female offspring). With all of his Somethingroyal and Rough Shod, one needed no expert heart scan to determine that baby Ghaiyyath had inherited a huge heart.

Ghaiyyath’s race record stands at nine starts, six wins, and two places, and his earnings at over half a million pounds. Clearly, there are no holes in this horse, from his pedigree, his achievements, his handsome appearance, his stellar relatives…all that remains is holding our breath until World Cup Day.