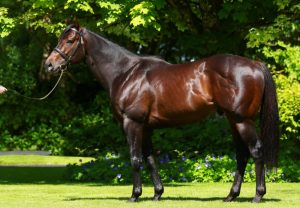 The North American-breds didn’t have a chance in the Mrs. Revere S.-G2 at Churchill Downs on November 29. Favorite New and Improved (Cairo Prince) showed little, while Irish-bred Nay Lady Nay (No Nay Never) found her way to the wire first, followed by German-bred Dalika (Pastorius) and Irish-bred The Mackem Bullet (Society Rock). Anyone who played a Euro Bred fifty cent pick three was rewarded with $517.65, a pretty attractive return for an inexpensive box.

Nay Lady Nay’s sire, No Nay Never, is already a star with just his second crop, with a stud fee at Coolmore Ireland that has gone up from 100,000€ in 2019 to 175,000€ for 2020, after becoming the leading freshman sire of 2018. Among his first-crop stakes winners was Nay Lady Nay’s full brother, Arizona, a Group 2 winner and Group 1 placed horse. Nay Lady Nay is out of the English Channel mare Lady Ederle, making the No Nay Never on English Channel mares cross a stellar one. Both Nay Lady Nay and Arizona are therefore 6 x 4 x 5 x 5 inbred to Mr. Prospector, and 7 x 6 x 6 x 5 x 5 to Northern Dancer, through an assortment of his sons including the excellent cross of closely related Storm Bird and Nijinsky II. Lady Ederle’s second broodmare sire is Rainbow Quest, by Blushing Groom, providing another great nick, as he was closely related to Nijinsky II as well.

In comparison, Dalika’s pedigree demonstrates little of the high-priced and high-powered strength of Nay Lady Nay. She is by Pastorius, who stands at Haras de la Hetraie, in France, for a mere 5800 € in 2020, but he is an interesting stallion as he features 5 x 5 inbreeding to Nijinsky II, and 5 x 5 inbreeding to Lyphard, while Dalika’s dams’ side includes three more doses of Northern Dancer, through Sadler’s Wells and Danzig, plus another dose of Lyphard, not to mention that extra, female dose of Northern Dancer’s dam, Natalma, through Danehill’s dam, Razyana.

Third place finisher The Mackem Bullet’s sire was the ill-fated Society Rock, who sired only a single crop of 2016 before succumbing to laminitis. By Rock of Gibraltar, a son of Danehill, with a pedigree that includes another dose of Danzig through his Champion son Chief’s Crown, Society Rock’s legacy was tragically cut short. Through the Mackem Bullet, however, he got a filly who is inbred 3 x 4 to Danehill, 4 x 5 x 6 to Danzig, 5 x 6 x 5 x 6 x 7 to Northern Dancer, and twice, 4 x 5, to the previously mentioned Razyana, who so complements all of the Northern Dancer in this pedigree, just as she did in Dalika’s.

The international flavor developing in North American turf racing provides an interesting counterpoint to the controversy over the dangerousness of North American dirt racing. With the latter under fire, world traveling horses bring added excitement to the former, plus added safety. We hope this trend continues, providing horses, riders, fans and betters with this thrilling alternative.