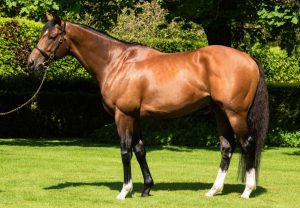 The list of leading sires of weanlings at European sales in 2019 features the usual suspects in top spots: Dubawi, Frankel, Invincible Spirit, Kingman, with Galileo missing only because none of his weanlings appeared in a sale. Continue on with the list, however, and there are surprises.

Three young stallions whose first crop weanlings sold, Churchill, Caravaggio and Almanzor, are at eighth, ninth and eleventh positions, all with an average sale price of around £90,000, a good return given that each stood, last year for £35,000, the same as they stood for in the year of the weanlings’ conception (with stud fees remaining close to steady for 2020).

Though they represent three different sire lines—Galileo is Churchill’s sire, Scat Daddy is Caravaggio’s sire, and Wootton Bassett is Almanzor’s sire—their commonality is their distinctly North American-flavored dams’ sides. Churchill is out of a Storm Cat mare, Meow, though the rest of Meow’s pedigree is Irish and British. This cross, of Galileo on Storm Cat mares, represents a terrific nick; in fact, Churchill’s full sister, Clemmie, was Champion Two-Year-Old Filly in Europe in 2017, just as Churchill was Champion Two-Year-Old Colt in Europe in 2016. Churchill’s pedigree features only three doses of Northern Dancer, through Galileo, Storm Cat and Topsider, making him an ideal cross for the wealth of Northern Dancer blood (Nijinsky II and Danzig come instantly to mind) that exists in UK mares’ pedigrees.

Almanzor represents the only cross of its kind for Wootton Basset—his dam, Darkova, has been bred to Wootton Bassett three times, creating three foals of racing age, all winners, for a massive AEI of 37.53. Almanzor’s broodmare sire is Maria’s Mon, a precocious multiple G1 winner, who brings the North American strains of Majestic Light and Buckpasser, but also offers Caro through his dam. Wootton Basset’s sire, Ifraaj, is by Zafonic (Gone West/The Minstrel), out of the Nureyev mare Pastorale, while his second dam was by Chief’s Crown, offering classic crosses to Northern Dancer, 6 x 5 x 6, but free of the pre-eminent Galileo/Sadler’s Wells line, making, as with Churchill, many mares excellent potential matches for him.

Caravaggio, by Scat Daddy, represents the most distinctly North American pedigree, with his Holy Bull dam and Relaunch second dam, and inbreeding to Mr. Prospector. He is also 6 x 6 Northern Dancer, through the closely related Storm Cat and Nijinsky II, making him, just as with the other two young stallions, a wonderful match with the prominent Northern Dancer strains in European pedigrees, being free of Sadler’s Wells and Danzig, and with added dividend for the potential addition of Blushing Groom. The high-selling colt at Goffs November Foals Sale in 2019, who fetched £100,000, brought through his dam both Danzig and Blushing Groom to the mix.

If one assumes that weanling buyers can predict a successful stallion, then 2020 is clearly the year to breed to one of these sires, while their stud fees remain relatively low and their promise seems high. Generally, third book sires have trouble finding enough mares, as potential needs to turn to reality for them, so 2020 may be the year to get a good mare to one or more of them, at a bargain price.