Flag of Honour: The Best Value of New Stallions For 2020 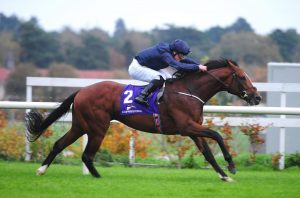 Sounds crazy, but you can breed to a Group One-winning son of Galileo, beginning his stud career in 2020, for only £4500. He is Flag of Honour, and he stands at the National Stud. I’ve saved him for last in these columns about new sires, because he is absolutely the bargain of the group. Flag of Honour won the St. Leger S.-G1, the Curragh Cup-G2, and the St. Leger Trial S.-G3, earning close to a million pounds.

If you’re guessing that his dams’ side is lacking, and therefore the cause for his low fee, guess again. His dam, Hawala, representing an entire dams’ side that was bred by the Aga Khan, is by Warning, one of the most interesting sires in European breeding, as he was by Known Fact, by In Reality and out of the Tim Tam mare Tamerett, also the dam of Secrettame, the dam of Gone West. This is North American breeding that infuses its get with speed, grit and tenacity. To create Warning, Known Fact was paired with the brilliant Broodmare of the Year Slightly Dangerous, by Roberto. It’s worth noting that Slightly Dangerous was also the dam of Deploy, by Shirley Heights, and one should not hesitate to consider inbreeding to that wonderful mare through her two sons.

Of course, Galileo is by Sadler’s Wells, by Northern Dancer, and Hawala features more Northern Dancer through Lyphard and The Minstrel, making Flag of Honour 3 x 5 x 6 Northern Dancer. As Galileo is out of one of the most influential mares of all time, Urban Sea, by Miswaki, Flag of Honour also presents inbreeding to Raise a Native, 5 x 5, top and bottom, both through mares, ensuring the large heart gene to be passed on. Add to that a dose, in the sixth position, of Sir Gaylord, whose dam, Somethingroyal, was also the dam of Secretariat, and was known to pass on the large heart gene herself. Flag of Honour’s dams’ side is every bit worthy of the greatness of Galileo.

The wild card inclusion of Known Fact on this dams’ side makes Flag of Honour an interesting mate for any number of North American-bred broodmare sire lines. Unbridled/Unbridled’s Song would suit Flag of Honour very well, as would Tapit and his sons, and War Front and his sons (especially since there is no Danzig in the young stud’s pedigree). Such promising young stallions as Territories, Invincible Army, and Advertise feature Warning in their pedigrees, at much higher prices. Gone West is a natural broodmare sire for Flag of Honour as well, offering inbreeding to Tamerett, as well as Gone West’s superior nick with The Minstrel, plus his Secretariat dam.

This is not to say that UK and European broodmare sires don’t suit Flag of Honour—they do. The previously mentioned Deploy should be added to the pedigree of potential offspring (making Dubawi mares ideal mates), as should the potent combination of Nijinsky II and Blushing Groom, as Flag of Honour’s pedigree is free of these, and Nijinsky II is a close genetic relative of The Minstrel. As mentioned earlier, this pedigree is free of Danzig, so finding some Green Desert to add to the mix is a natural, as you get that stallion, plus Blue Hen mares Courtly Dee and Somethingroyal. Daughters of Sea the Stars would also be ideal, offering both Green Desert and another huge dose of Urban Sea, not to mention the Lorenzaccio/Klairon cross which the Roberto in Flag of Honour would love to be paired with.

Storm Cat-line mares must also be mentioned, as Storm Bird is a close genetic relative of The Minstrel and Nijinsky II, and the Scat Daddy branch of this family, so red hot because of sons such as No Nay Never, presents Damascus to complement Roberto, Nijinsky II, and inbreeding to Mr. Prospector, not to mention the wealth Elusive Quality, No Nay Never’s broodmare sire, brings to the party, with Gone West and Sir Ivor. Giant’s Causeway and his sons, such as Shamardal, also represent huge possibilities for Flag of Honour, with his Blushing Groom and Roberto. (May I whisper in the ear of the owner of Nay Lady Nay, who is undoubtedly going to a more expensive stud, though the talented mare ideally suits Flag of Honour?)

I don’t know if Flag of Honour’s first book is already filled. I would guess it is. But for owners of mares who fit him, it’s worth a telephone call and a bit of pleading. Flag of Honour is all upside, affordable and well-bred. He represents the best value of the 2020 crop of new stallions at stud.