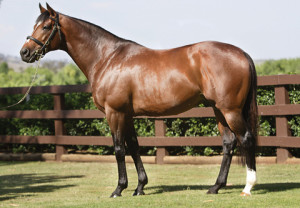 One Thousand Guineas day, 2020, at the Curragh was all about déjà vu: Aidan O’Brien, Seamie Heffernan, and of course, the greatest sire on the planet, Galileo. Peaceful was victorious in the Irish 1000 Guineas-G1, while Lancaster House took the Gladness S.-G3, and fabulous Magic Wand won the Lanwades S.-G2, all for the usual Coolmore owner suspects of Tabor, Smith and Magnier. Coolmore is uniquely capable of making a stallion, as it breeds under various names, buys the best mares for its studs, and buys the best yearlings by its own studs (Magic Wand fetched €1.4 million from them as a yearling at auction). Coolmore also owns more stallions and stallion shares worldwide than any other entity. Though I laud Juddmonte’s breeding program, it is minuscule compared to the global enterprise that Coolmore has become.

And this enterprise is headed by 22-year-old Galileo, the eminence gris of Coolmore Ireland. His list of group winning progeny reads like War and Peace, so populated is it with well-known names and plot twists. Galileo nicks well with a wide range of mares, but there are certain repeating tropes that need attention to be paid, such as his great affinity for Danehill and his sons, which I have documented in these columns. One need go no further than the mighty Frankel to identify this cross, though his Group One winners are replete with Danehill and Danehill Dancer dams. Magic Wand, however, is the only Group One winner out of a Dansili dam, though this makes perfect sense as a great nick, and indeed, it features a 5.43 AEI.

Magic Wand’s Dansili dam is Prudenzia, a stakes winner in France, with a wealth of pedigree backing up her racing and producing ability. There is only a single strand of Northern Dancer in Galileo, so of course backing that up with more Northern Dancer on the dams’ side works wonderfully, and Prudenzia provides four more strands, through Danzig, Nijinsky II, The Minstrel and Lyphard, making Magic Wand 3 x 5 x 7 x 7 x 6 Northern Dancer. Dansili’s great-grandfather is Blushing Groom, providing the magic cross of Nijinsky II and Blushing Groom, with the addition of Roberto, the damsire of his third dam, providing another cross (5 x 6) of Hail to Reason that twins with that via Bold Reason in Galileo. Danehill also provides riches through his dam, Razyana, whose dam, Spring Adieu, offers both Buckpasser and a rogue dose of Almahmoud to complement all of the Northern Dancer in the pedigree, through a mare instead of a stallion like all the others, adding the important zig-zag factor. It is no wonder that Danehill mares are such a perfect match for Galileo.

Platonic is Magic Wand’s second dam, and she brings her own magic to this cross. Returning to Bold Reason, the broodmare sire of Sadler’s Wells in Galileo’s pedigree, we find a classic cross of Turn-to on Djeddah, closely related sires. We’ve documented the Hail to Reason/Turn-to in Dansili, but Platonic adds another dose of Djebel, the sire of Djeddah, and a third close relation, Klairon, through Lorenzaccio. The only one of four closely related sires missing is Ambiorix. Putting three of these four in a pedigree creates stakes winners at a high rate. It should be noted that there is a second dose of Lalun in Magic Wand’s dams’ side, via Never Bend in the seventh position, and that Never Bend and Bold Reason are closely related as well, the first by Nasrullah, the second by Hail to Reason, two sires who complement each other and strengthen the Djebel/Turn-to/Klairon bond. Add inbreeding to Buckpasser top and bottom, and to Mr. Prospector through two of his most influential sons, Miswaki and Gone West, 4 x 4, and one sees that on pedigree alone, Magic Wand justifies her million and a half Euros price tag.

Coolmore bred Irish 1000 Guineas-G1 winner Peaceful themselves, demonstrating the good use they get out of their superstar stallion, Galileo. At first glance, Peaceful’s pedigree bears little resemblance to Magic Wand’s, but go past the first four or five generations, and similarities abound. Missvinski is the dam of Peaceful, and she is by Stravinsky, who stood for a time at Coolmore America, and was a particularly handsome son of Nureyev with an intelligent, masculine head and the look of eagles. He offers the inbreeding to Northern Dancer that Galileo loves, 3 x 4, but he also brings his beautifully bred dam, Fire the Groom, by Blushing Groom and out of the Mr. Prospector mare Prospector’s Fire, making Peaceful 5 x 5 Mr. Prospector. Sound familiar? All of these elements appeared in Magic Wand’s dams’ side as well. Add to that the appearance in the fifth generation of Roberto, who appeared similarly in Magic Wand in the sixth position, and it becomes apparent that a lot of the same elements exist as in Magic Wand, but blended in a slightly different recipe. It must be mentioned here, as well, that Sadler’s Wells (by Northern Dancer, out of Special’s daughter Fairy Bridge) and Nureyev (by Northern Dancer, out of Special herself) are so very closely related, but on the zig-zag, resulting in the large heart gene that Northern Dancer and Nureyev surely carried. As well, her pedigree features the close relations that we saw in Magic Wand, slightly altered: Turn-to, Djebel, and his son, My Babu.

Peaceful’s pedigree, however, has its own magic trick, an amazing build-up of Nasrullah blood just off the five generation page, making her 7 x 7 x 7 x 7 x 8 x 7 x 7, through an assortment of sources such as Nantallah, Nashua, Red God, On-and-On, and ultimately, Peaceful’s fifth dam, Miss Uppity, giving eight of her 32 fifth generation ancestors, a full fifth of them, a direct Nasrullah line, and, of course, on the zig-zag. Nasrullah (1940) complements the Northern Dancer here, as he too was by Nearco, and his dam, Mumtaz Begum, is a half-sister to Mahmoud, the sire of Northern Dancer’s dam, Natalma.

Similarly, though at first glance Lancaster House’s pedigree looks quite different than Magic Wands and Peaceful’s, we again find the same pieces of the puzzle put together to create a different look. Lancaster House, also bred by one of Coolmore’s operations, is 3 x 5 x 6x 5 Northern Dancer, with Danzig, through Green Desert, in the same position as in Magical’s pedigree on the dams’ side, and a similarly placed appearance by Lyphard. The difference, however, is that Lancaster House is 2 x 4 Sadler’s Wells, as his third dam, Park Heiress, is by Sadler’s Wells, just as Galileo himself is. Talk about the ultimate zig-zag! And the huge heart gene!

Instead of Roberto, Halo represents the Hail to Reason line in the dams’ side that complements Bold Reason in the sires’, though Halo brings with him his dam, Cosmah, Natalma’s half-sister. Just as in Magic Wand, we get dual doses of Never Bend, through Courtly Dee and Mill Reef (there’s that zigzag again), and through Ahonoora, just as in Magic Want, we get that dose of Klairon, complementing the Turn-to in Halo and Sir Ivor.

So it would seem that Coolmore has a checklist of items that must appear in a pedigree to gain the mare a date with Galileo. These elements can be distributed in various ways, but Coolmore knows what works, and whether they breed the foal themselves or must pay dearly for it at sale, they know exactly what they want and need to make a racehorse with their great stud. The Coolmore business model, which has altered the thoroughbred horse industry in many ways, strikes again, creating a brilliant stallion in Galileo, and brilliant offspring which enhance his value.