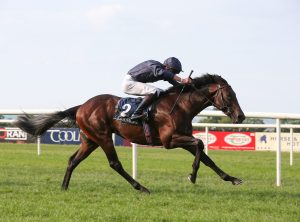 Superstar stallion No Nay Never, the leading first crop sire of 2018 whose stud fee has rocketed to £175,000, has sons from that first crop attempting to carry on his legacy at less steep prices, among them Group Two winner Land Force. Standing at Highclere Stud, England, for £6500, the colt represents great value as he was a brilliant, precocious race horse at two, and has a stallion’s pedigree. Forced into retirement after only one start at three, Land Force earned £192,043, and, along with Ten Sovereigns (standing his first season at Coolmore with his sire), moves the No Nay Never magic into the realm of breeders with smaller check books.

Like so many young studs, Land Force is staunchly inbred to Northern Dancer (7 x 6 x 6 x 5 x 5 x 5 x 5), through a collection of different sons and daughters, and to Mr. Prospector (6 x 4 x 5 x 5 x 6), again through an assortment of male and female offspring. What strengthens this pedigree further is the wonderful addition of a multitude of strains of Secretariat’s dam, Somethingroyal, through Storm Cat and Gone West on the sire’s side, as both are out of Secretariat mares, with the addition of Somethingroyal’s grandson, Sir Ivor, in Elusive Quality. On the dams’ side, the Secretariat mare Betty’s Secret, the dam of the Northern Dancer son Secreto, reels in this profound influence on the sire’s side, making Land Force 7 x 7 x 8 x 7 Somethingroyal. The addition, on the dams’ side, of River Lady, through her daughter Push Button, adds another dose of Princequillo, Somethingroyal’s sire, through his son Prince John, and makes the Riverman/Irish River cross very appealing, especially the latter, who brings his own strain of Klairon to complement the one via Lorenzaccio in this dams’ side. Even more mare power is added by Danehill’s stellar dam, Razyana, on the dams’ side. By His Majesty, and out of Spring Adieu (by Buckpasser, out of Natalma), this daughter of Natalma pulls all of the strains of Northern Dancer, also by Natalma, together on the zig zag.

No Nay Never has sired two Group Two winners out of English Channel mares, and this cross would certainly be beneficial for Land Force as well. English Channel is by Smart Strike, who, though he was by Mr. Prospector, seems to be evolving his own sire line thanks to son Curlin and his offspring now at stud. Out of a Theatrical mare, English Channel offers through Theatrical a grandson of Northern Dancer who has not yet appeared in Land Force’s pedigree, Nureyev, along with a double dose of Turn-to that complements the Klairon and My Babu in Land Force.

Mares by Cape Cross, Sea the Stars, Dubawi and Galileo would also benefit Land Force greatly, as would the addition of any Blushing Groom to complement the Nijinsky II in the pedigree. Any stallion featuring Urban Sea, by Miswaki, would draw in the strength of Razyana/Buckpasser. I wouldn’t hesitate to add another dose of Storm Cat through his greatest son, Giant’s Causeway, because of the addition through him of Rahy and Turn-to, and his sons, such as the very hot Shamardal, offer Giant’s Causeway and Machiavellian, another son of Mr. Prospector who seems to have begun a unique sire line and who, like English Channel, presents a wealth of Turn-to. A young stallion whose daughters might also prove valuable for Land Force is Lope de Vega, with his double dose of Machiavellian, and his Giant’s Causeway sire line. It should also be noted that Nashwan would provide Blushing Groom, plus a dose of the powerful mare Feola, who already exists in Land Force’s pedigree through Vaguely Noble in his sire line.

Land Force’s fifth dam is the Dr. Fager mare Street’s Glory, who when bred to Mr. Prospector created his fourth dam, Fager’s Glory. No Nay Never has had a Group winner with Broken Vow, another North American stallion featuring Dr. Fager’s family, and more of this family (In Reality, Ta Wee, Fappiano, Holy Bull, etc.) would surely benefit Land Force, as would mares by Unbridled’s Song, offering that family plus Buckpasser, Caro and Le Fabuleux.

The wide variety of broodmares that should work with Land Force may be a key to his future success. The intense inbreeding to Northern Dancer and Mr. Prospector, instead of becoming a problem, seems to offer possibilities galore for this young stallion because of the varied sources for each. The Scat Daddy/No Nay Never sire line seems destined for more greatness, and there is no reason why Land Force should not continue that supremacy.