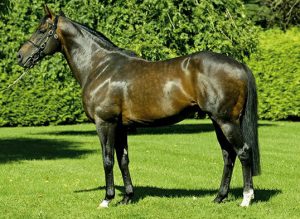 Old faithful Invincible Spirit (1997) seems to be having a renaissance, thanks to his plethora of sons at stud and going to stud this year. Kingman is already a force to be reckoned with at stud, and Territories’ offspring are regularly topping sales. This year, Invincible Spirit’s sons Magna Grecia and Invincible Army are joined by . This Group One winner of the Commonwealth Cup at Ascot seems great value at £6500, and insight into what mares may work well with him may be gained by examining the dams’ side of his father’s other sons at stud, as well as from examination of what his pedigree offers.

The key to Invincible Spirit’s success is undoubtedly his sire, Green Desert, by Danzig, and out of the Sir Ivor mare Foreign Courier. Foreign Courier’s dam is the Blue Hen mare Courtly Dee, and Sir Ivor’s grandmother is another Blue Hen mare, Somethingroyal. Courtly Dee’s pedigree is a mélange of amazing blood, as she is by Never Bend, by Nasrullah, and out of Lalun, by Djeddah, providing the first glimpse of the close genetic relations Djeddah, Klairon, Turn-to and the nearly extinct Ambiorix. Lalun’s dam, Be Faithful, was by Bimelech, a son of La Troienne. Courtly Dee’s dam, Tulle, was by War Admiral, out of Judy-Rae, out of Betty Derr, a daughter of Sir Gallahad II. This is some serious mare power, through this single animal, Courtly Dee.

Through Invincible Spirit’s dam, Rafha, we get a rogue dose of Native Dancer, through Sharpen Up and his sire Atan, making Invincible Spirit a wonderful cross with the Mr. Prospector line, a dose of Bois Roussel, Sir Gallahad II’s half-brother, a dose of Princequillo through his son, Round Table to twin with the Princequillo through his daughter, Somethingroyal, and My Babu, the close genetic relative of Djeddah. All of the elements of Invincible Spirit’s pedigree cry out for more Northern Dancer, for Halo, for Raise a Native, for Klairon, and, of course, for more Somethingroyal. Luckily, all of these are available in abundance, for both Invincible Spirit and his sons.

Eqtidaar’s dams’ side supplies some of these elements. His dam, Madany, has, as her great-great grandfather, Try My Best, the full brother to El Gran Senor, meaning he is by Northern Dancer, out of the Buckpasser mare, Sex Appeal. Madany’s sire, Acclamation, has a dam by Ahonoora, a son of Lorenzaccio who supplies the desired Klairon. This dams’ side is double-bred, 5 x 4, Auction Ring, providing double doses of both Bold Ruler and Djeddah, whom we’ve already noted in Courtly Dee’s pedigree, on top of the My Babu in Invincible Spirit.

Eqtidaar’s second dam was by Law Society, a son of Alleged, who added Ribot, more Princequillo, more Bold Ruler, Tourbillon (also found in Djeddah and My Babu), more War Admiral, and most miraculously, through Law Society’s grandmother, Ran-Tan, both Mahmoud and his full sister, Mah Iran, twinned, here, with Bois Roussel (again), who with the Mahmoud mare Majideh, created Ran-Tan’s dam, Mehrabi (through Migoli, the son of Bois Roussel and Maha Iran). It should be noted that another already-popular son of Invincible Spirit, Territories, has in his dams’ side a dose of Hoist the Flag, through his daughter Raise the Standard. Territories is out of a Machiavellian mare, suggesting an excellent mate for Eqtidaar, as Machiavellian provides Mr. Prospector, Halo, the aforementioned Hoist the Flag, and tail-female Natalma. Similarly, a Shamardal mare would be ideal for Eqtidaar, providing Northern Dancer through Storm Cat, Somethingroyal through the Secretariat mare Terlingua, and Machiavellian through his dam, Helsinki, a full sister to Street Cry.

It should be noted that Invincible Spirit’s sons Invincible Army and Territories both feature a dams’ side with Warning in the third position. This son of Known Fact, out of the Roberto mare Slightly Dangerous, would be perfect for Eqtidaar as well, as she adds another strain of Native Dancer. Kingman is out of a Zamindar mare, offering the wealth of Gone West (Mr. Prospector and a Secretariat mare) and another son of Northern Dancer, The Minstrel, plus Lyphard, more Northern Dancer, and Mill Reef, more Never Bend. All of these would work well for Eqtidaar as well. As would a daughter or granddaughter of Danehill, presenting another line of Danzig, along with his dam, Razyana, adding more Ribot, Buckpasser, and tail-female Natalma.

If I could nominate a single mare to be a part of Eqtidaar’s first crop, it would be Taranto, the dam of Territories. Her pedigree is a marvel when paired with that of Eqtidaar, with the Machiavellian, Warning, Sadler’s Welles, and as her third dam, Helen Street, the dam of Street Cry. Apparently owned by Darley, might it be arranged that she could be loaned, for the 2020 season, to Darley’s close genetic relative, Shadwell? That would fulfill my 2020 Christmas list, and then some.