Snowflakes, Goffs Ireland And The Legacy of The Tetrarch 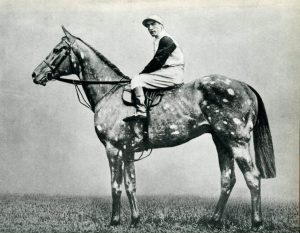 The top-selling lot of the Goffs November Breeding Stock and Foal Sale was Snowflakes, who sold for £525,000, in foal to the promising young Coolmore sire U S Navy Flag (making the resulting foal 3 x 2 Galileo).

Snowflakes, like the unicorn, is that rare if not fantastical creature: a gray Galileo mare. She comes from a line of gray females, her complete tail female line having that coloration, and she herself deserves her name, as she looks to be covered in…well, you get it. Three-quarters of her pedigree offers the usual thoroughbred coloration: bay and chestnut. Her broodmare sire, the Danehill Dancer son Choisir, like Snowflakes’ sire, Galileo, has no gray ancestors whatsoever. Having seen her second broodmare sire when he stood in Kentucky, I can testify that Favorite Trick, like his sire Phone Trick, was dark bay. I also saw Riverman, her third broodmare sire, late in his career, and he too was relentlessly bay, not a spot of white on him. So where does the gray come from, and how and why is it so dominant in certain pedigrees, like Snowflakes’, from such a limited pool of recessive coloration? 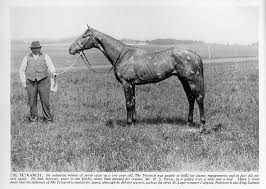 I’d always assumed that Mahmoud (1933) was the source of most of the gray in thoroughbreds, and, indeed, his overwhelming presence in contemporary thoroughbreds, through various sources but most significantly through his daughter, Natalma, the dam of Northern Dancer, and slightly less so through Cosmah, the dam of Halo, both out of the Mahmoud mare Almahmoud, makes him ubiquitous. But both Northern Dancer and Halo were bay horses. Mahmoud seemed to transmit the recessive gray gene to some of his sons and grandsons, such as The Axe II and Al Hattab. His grandsons, by way of female offspring, such as Relaunch, can be gray, as is Relaunch’s full sister, Moon Glitter, so prominent in leading sire Tapit’s pedigree (and powerful, as Tapit, from the very bay Seattle Slew/A.P. Indy line, turns whiter as he gets older).

But there are important gray stallions without a hint of Mahmoud in their pedigrees. How to account for this? Think of Caro and his son Cozzene—great grass and stamina influences, but Mahmoud-free. I had the privilege of seeing Cozzene, at Gainesway in Lexington, Kentucky, and he was a vision in white. That glorious, dishy, Arabian-influenced head, the doe eyes, and those thick, stout Doric columns that were his front legs, especially his cannon bones. And the lesser-known South African-bred Wolf Power, who also stood his later years at Gainesway—nearly white, and Mahmoud-free as well. There had to be another explanation as to where gray originated, and how it proliferated, in the thoroughbred. 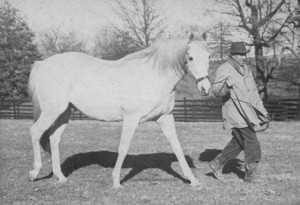 The place to start is an examination of Mahmoud’s pedigree. He was by Blenheim II (1927), out of the Gainsborough mare Mah Mahal (1928), a daughter of the Aga Khan-bred “flying filly,” Mumtaz Mahal. The entire sires’ side is a combination of the usual brown and bay horses, with a couple of chestnuts thrown in, but in the fifth generation. Gainsborough’s pedigree demonstrates the same coloration. But both Mah Mahal and Mumtaz Mahal are both gray, and the source of that grayness, the only such source in Mahmoud’s whole pedigree, is the 1911 stallion The Tetrarch. That one stallion can inform and alter a pedigree so thoroughly demands further investigation.

The Tetrarch’s grayness can be traced back to 1711, to a stallion named Master Robert, by Butter (1698) out of Spinster (1705), but at this point in the stud book, a horse’s color was not recorded, so we lose track of this recessive, though powerful, gene. For our consideration, however, The Tetrarch is the single horse, in modern times (the twentieth century and beyond), who has influenced all gray coloration in the thoroughbred. Certainly his is the only gray influence in Mahmoud’s pedigree. But what about other significant gray thoroughbreds? 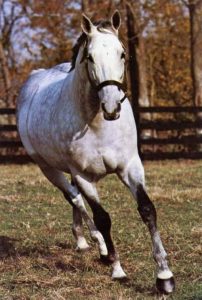 Caro (1967) is inbred to The Tetrarch 6x7x6, through his daughter and close genetic relative of Mahmoud, Mumtaz Begum, his daughter Queen Herodias, and his son Tetratema. Caro’s brilliant son, Cozzene, adds two more doses of The Tetrarch in his dams’ side, 7x8, through his son Stefan the Great and his daughter, Herodias. In both pedigrees, The Tetrarch is the solitary gray influence, yet both important stallions were grays, who, as they aged, turned pure white.

Wolf Power (1978) hails from the Round Table sire line, being by Flirting Around, a son of Round Table, and, like Mahmoud’s sire line, his top side is without gray influence completely. His dam, Pandora, a chestnut, is by the gray stallion Casablanca, and it is through him that we find that same infusion of The Tetrarch, through double breeding to the flying filly herself, Mumtaz Mahal, through her more famous daughter, Mumtaz Begum, and her lesser known daughter Rustom Mahal, making Wolf Power inbred 7x7 to The Tetrarch.

That this inbreeding to The Tetrarch has the ability, in Wolf Power, to overcome a bay sire and a chestnut dam and emerge in the gray coloration of Wolf Power indicates that this is a recessive gene of remarkable potency.

It is worth noting one more thoroughbred stallion, a major force in racing quarter horse breeding and solely responsible for gray coloration in that breed, Beduino (1968). Like Caro, he is a grandson of Grey Sovereign, whose two doses of The Tetrarch, 6 x 7 in Beduino, are enough to mark this stallion with the gray gene. A stray strain of gray seems to appear, through Beduino’s dams’ side, but by tracing it back one finds The Tetrarch’s last known gray ancestor, the aforementioned 1711 stallion Master Robert. The evidence piles up: this is no coincidence.

All of this brings us back to Snowflakes, and her relentlessly bay, brown and chestnut pedigree—except for her tail female line, which is completely gray to the eighth dam. That mare, Silver Lady (1932), is by Old Rowley (1921), a son of none other than - The Tetrarch. Combine that with the multiple doses of Natalma in the rest of the pedigree, through Northern Dancer twice, and through Danehill’s dam Razyana, whose second dam is Natalma, not to mention the dose of Mumtaz Mahal in Riverman, and the result is this anomalous gray Galileo mare who topped the Goffs sale.

That we can trace a four-year-old filly’s coloration back to a stallion born in 1911 underscores the magic of pedigree study, and forces us to question the power of some recessive genes. The Tetrarch’s influence on 21st century pedigrees remains potent and surprising.