Mabs Cross To Visit Zoustar In 2020 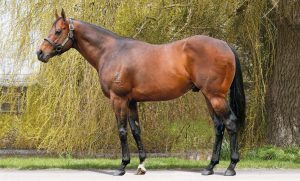 The announcement that Sheikh Fahad’s Qatar Racing had privately acquired the Group One winning mare Mabs Cross, after she went through Tattersalls November Sale unsold for 1.1million guineas, was news in and of itself. Mabs Cross had been Cartier Sprinter of the Year in 2018 after winning that year’s Prix de l’Abbaye.

Only a five-year-old, her future reproductive life should be fascinating, as she is by Dutch Art, a collection of great blood including Machiavellian, Storm Bird, Blushing Groom, Irish River, and that dose of Natalma through a daughter, Raise the Standard, complementing the Northern Dancer and Halo in his pedigree.

Her broodmare sire is Pivotal, a grandson of Nureyev (note that Nureyev’s dam, Special, hails from the Blue Hen family of Rough Shod II), and her dams’ side features a double dose of Caro, through Cozzene and Rusticaro, plus Ribot in the sixth position, complementing the same sire in the seventh position in Dutch Art. Mabs Cross is 7 x 7 x 7 Almahmoud, through a surprising variety of sources that should provide all of the greatness of Almahmoud’s daughters—Natalma is represented by her son Northern Dancer, and by her daughter, Raise the Standard, while Cosmah is represented by her son Halo. The perfect stallion for her would offer more Almahmoud, more Roughshod II, and, as she has in her bloodlines Blushing Groom and Blushing Groom’s father, Red God, a bit of Nijinsky II.

Enter Zoustar, whom Sheikh Fahad announced would be Mabs Cross’s mate for 2020. If you’ve not heard of him, you’re not alone. Zoustar stood his first year in the Northern Hemisphere in 2019, at Tweenhills Stud in Gloucestershire, though his stud career began in 2015 in Australia, where he had a stellar three-year-old career, winning the Golden Roses S. and Coolmore S., both Group One, before being retired at four after only one start that year.

Then, his babies hit the track, and they made him leading first crop sire, leading second crop sire, and leading third crop sire this year, 2019. Canny David Redvers imported him for Northern Hemisphere breeding in 2019, and Zoustar returns to Redvers’ Tweenhills Stud for 2020, and his book is already full. His stud fee in 2020? A reasonable £30,000. With mares like Mabs Cross lining up.

Zoustar’s sire is Northern Meteor, whose sire was Encosta de Lago, and whose dam was, surprisingly, a Fappiano mare, Explosive. Several interesting factors exist in Encosta de Lago’s pedigree. His sire was Fairy King, Sadler’s Wells’ full brother, providing, therefore, Northern Dancer (and his dam Natalma), Bold Reason with his dose of Djebel, Klairon through New Way, and Rough Shod II, as her granddaughter, Special, is the dam of both Fairy King and Sadler’s Wells, Special. Encosta de Lagos’ second dam is the Mr. Prospector mare Rolls, whose dam, Grand Luxe, was by Sir Ivor, out of the great Northern Dancer mare Fanfreluche, adding another dose of Natalma.

There’s one more magic trick in Northern Meteor’s pedigree, however. His third dam is Moccasin, also out of Rough Shod II, and therefore a full sister to Special’s dam, Thong, as both are by Forli. Mabs Cross, remember, features its own dose of Special, but this time through her son Nureyev, making the doses of Rough Shod II on the zig zag, so that this potential foal gets all of the best of the remarkable genetics of Rough Shod II, from both female and male ancestors bred so similarly.

Zouzou, of course the dam of Zoustar, is by Redoute’s Choice, Australia’s premier son of Danehill. Danehill offers yet another cross to Northern Dancer (and Natalma) through Danzig, but his dam represents pedigree treasure, as she is Razyana, by His Majesty (Ribot), out of Spring Adieu, who was by Buckpasser, and out of Natalma. So we’ve added yet another female, rogue source of Natalma to Mabs Cross’s pedigree, plus more mare power: the La Troenne in Buckpasser.

Redoute’s Choice’s second dam completes the symmetry of this complementary pedigree cross. Dancing Show is by Nijinsky II (remember the Blushing Groom in Mabs Cross), out of the blue-blooded mare Show Lady, by Sir Ivor, out of Juddmonte’s stellar Blue Hen Best in Show, bringing her own dose of La Troienne, through a son this time.

The two doses of Ribot in Mabs Cross, and the single dose, through His Majesty, in Zoustar, might indicate that this offspring will get more distance of ground than either of his parents. We have, as well, multiple doses of Forli in this offspring, through a son and daughters.

In his brief career at stud, Zoustar has sired one brilliant Group One winner, Sunlight, five Group Two winners, and four Group Three winners, in Australia. His first UK crop will be foaled in 2020. Given his ongoing success in Australia in getting Group winners and leading the pack of young studs, one may assume that his book of mares for 2020 will be even better than his 2019 book. This makes Zoustar a dual hemisphere stallion to watch. If his foals run in the UK and Europe as they have in Australia, his stud fee will rise like a rocket ship. It is rare for a stallion to begin his career in the Southern Hemisphere, and then shuttle to the Northern Hemisphere and find success there. Candy Ride, in North America, comes to mind, but not much else. Let’s see if Zoustar can break the mold.