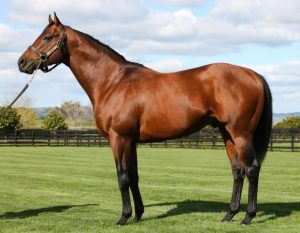 The pedigree of upset winner of the Criterium de St. Cloud-G1, Mkfancy, fascinates, because it reads as a lesson in the subtle differences and similarities between UK/European pedigrees and North American pedigrees. This two-year-old colt beat the favored Coolmore duo, both by Camelot, though his sire, Makfi, certainly embodies the elements to make a top sire, being by Dubawi, out of the Green Desert mare Dhelaal. Unfortunately, the Shadwell-bred Makfi now stands in Japan, but Mkfancy looks to further his legacy.

Inbreeding to Mr. Prospector, Raise a Native and Native Dancer has become commonplace in both UK/European pedigrees and North American pedigrees. In North America, however, the usual inbreeding seen at this time is a combination of Mr. Prospector with his own son, Fappiano, who is considered to have developed his own sire line, through his son, Kentucky Derby-G1 winner Unbridled and his progeny, and who also influences the breed through his daughters and granddaughters.

Perennial leading North American sire Tapit represents this cross, with his sire, Pulpit, being out of a Mr. Prospector mare, while his dam, Tap Your Heels, is by Unbridled. Similarly, another leading North American sire, War Front, is out of the Rubiano mare Starry Dreamer, whose inbreeding to In Reality and his close relations provides dirt speed and grit, while the dose of Nijinsky II provides stamina and a bit of turf, perhaps the reason why War Front’s progeny excels on both dirt and turf.

As well, War Front is by Danzig who, though he stood in Kentucky, is still a force to be reckoned with in UK/European pedigrees, as we will see.

Mkfancy’s pedigree features inbreeding to Raise a Native and Native Dancer as well, but through almost entirely different sources. Ubiquitous Mr. Prospector anchors the sire line, of course. Triple crown winner Affirmed, by Exclusive Native, by Raise a Native, appears in Mkfancy’s dams’ side, so the North American dirt influences certainly do appear.

Then, there appears the rogue strain of Native Dancer through Diesis, a great grandson of Native Dancer. The difference, of course, is that the UK/European pedigrees that feature so much Raise a Native and Native Dancer come through turf influences, instead of the purely dirt influences which occur when Mr. Prospector and Fappiano combine. The affinity of Nijinsky II for Blushing Groom occurs in this pedigree, as well as in many North American pedigrees.

The other truly interesting aspect of Mkfancy’s pedigree in terms of North American and UK/European pedigrees has to do with the combination of closely related My Babu (1945), Klairon (1951), Turn-to (1951), and the ubiquitous Never Bend (1960) visible in so many UK/European pedigrees, but almost entirely missing from North American pedigrees. North American pedigrees are rife with the My Babu/Turn-to cross, due to the pre-eminence of the A.P. Indy sire line. This sire line loves the addition of more Turn-to, usually through sons of Hail to Reason such as Halo and Roberto, and occasionally the now nearly-lost Ambiorix, another close relation of all of the above, enhances this powerful cross.

The basis for the potency of this cross lies in inbreeding to Djebel and his sire Tourbillon in the sire lines, combined with Lavendula and her dam, Sweet Lavender, in all their dams’ sides except for Never Bend’s, though his dam, Lalun, is a granddaughter of Djebel, making this cross on the zig-zag. It must be noted that Blushing Groom is from the Nasrullah line, and Nasrullah too is closely related to all of the above, with Never Bend being from the Nasrullah line as well.

In Makfi’s pedigree, we have two significant crosses to Never Bend, through his Blue Hen daughter Courtly Dee, the granddam of Green Desert, and through Makfi’s second dam, Irish Valley, by Irish River. Irish River is a pedigree goldmine, being by Riverman, a son of Never Bend (great grandson of Djebel), and out of the Klairon mare Irish Star.

There is another dose of Klairon in Mkfancy’s dams’ side, through his second dam, Fancy Stone, whose second dam, Martingale, is by Luthier, a son of Klairon. Pair these with the two doses of Roberto, by Hail to Reason, by Turn-to, through his daughters Slightly Dangerous in the sires’ side and Modena in the dams’ side, and we have a perfect balance of Klairon and Turn-to, top and bottom. Clearly, the combination of Hail to Reason and My Babu can create dirt excellence, while Hail to Reason combined with Klairon creates turf stardom.

Mkfancy’s pedigree also includes inbreeding, top and bottom, to Spy Song, who also has almost disappeared from North American pedigrees except for his grandson’s appearance in the pedigree of the great Storm Cat, in the equine personage of Crimson Satan.

It must be stated that the linchpin in both North American and UK/European pedigrees is Northern Dancer, perhaps the pre-eminent modern influence on the thoroughbred in both dirt and turf racing. His dominance in both is entirely influenced by the mares he was bred to. The mares’ dirt or turf pedigrees were the determining factor in the offspring’s preferred surface, and in the continuing influence, worldwide, of Northern Dancer’s supremacy.