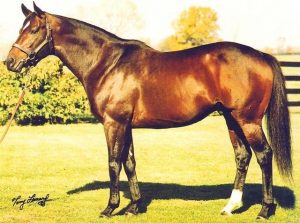 When Lemista won the Group Three Park Express S. at Naas on Monday, her first group win after a maiden win, examination of her pedigree initially yielded confusion, which then coalesced into epiphany. Lemista’s fifth dam is Miss Carmie (1966), by T.V. Lark, out of the Ponder mare Twice Over, a pedigree graced by two doses of Bull Dog, top and bottom, in the fourth position and on the zigzag, through a daughter in the sire line, and a son, Bull Lea, in the dams’ side.

Miss Carmie was a Blue Hen, and her influence on the breed remains, not only through Lemista, but through the North American winner of the Fair Grounds Oaks-G2 last Saturday, Bonny South. The Juddmonte-bred daughter of Munnings has Miss Carmie as her fifth dam as well, and it should be noted that Bonny South’s pedigree shares many elements with the pedigree of Lemista: Gone West, with his Secretariat dam; another dose of Secretariat through Storm Cat; Lord at War; another dose of Secretariat through A.P. Indy, and Nureyev.

Lemista’s sire is Raven’s Pass, who stands at Darley’s Kildangan Stud in County Kildare, Ireland, for €10,000. A son of Elusive Quality (who was a son of Gone West), out of the Lord at War mare Ascutney, Raven’s Pass was a multiple Group One winner in both North America and the UK. Lemista’s broodmare sire is Arcano, by Oasis Dream, and Raven’s Pass has sired two other good winners, Raven’s Corner and Aquila Solitaria, with Oasis Dream mares, so this is a proven cross. The question is: why do this cross and this pedigree work?

The answer lies in a consideration of the 1984 North American Champion Two-Year-Old Colt, the winner of the first Breeders’ Cup Juvenile S., and the only horse ever to be favored for all three North American Triple Crown races and not win a one of them, Chief’s Crown. I am a particular fan of Chief’s Crown, as I had one foal by him out of a stakes-winning mare, and this colt was my favorite that year, as he was a beautiful chestnut twin of his small, neatly-made, well-conformed sire, right down to his forehead star. He tragically died as a yearling, breaking my heart as only beloved horses can do.

Chief’s Crown also died an untimely death, in a paddock accident at Three Chimneys Farm in Kentucky, but he lives on through Lemista’s fifth generation. First, Chief’s Crown’s third dam was the aforementioned Miss Carmie, through her stakes winning daughter Chris Evert, the granddam of Chief’s Crown through her second foal, the Secretariat mare Six Crowns. Chief Crown’s sire was Danzig, who also appears in the fifth position of Lemista’s dams’ side, as the sire of Green Desert. It must be noted that Oasis Dream, Green Desert’s son and Lemista’s maternal grandsire, has two doses of Secretariat’s dam, Somethingroyal, through Sir Gaylord’s son Sir Ivor, and his grandson, Dancing Brave, making Lemista 6 x 7 x 7 x 7 Somethingroyal, twice in the sire line and twice in the dam line. There was little Danzig liked more than being mated to mares with Somethingroyal up close in their pedigrees, usually either by Secretariat or Sir Ivor. Lemista’s pedigree offers that in abundance.

So: Danzig on a granddaughter, by Secretariat, of Miss Carmie, plus Danzig, yields both Chief’s Crown, and closely related Lemista. Yet another blast from the past, a great Blue Hen reaching out and influencing contemporary pedigrees, like those of both Lemista and Bonny South.