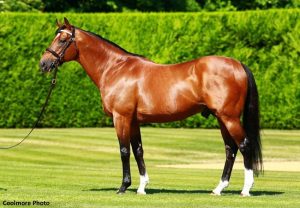 Way to Paris is a wonderful, romantic name for the glorious white horse who won the 2020 Grand Prix de Saint Cloud S.-G1 at Chantilly Race Course. Put wings on his shoulders, and he’d be Pegasus in the flesh.

At seven years of age, he seems to have entered his prime, and one can’t wait to see him race again. Unfortunately, his sire, Champs Elysees (2003), died before he could stand a season at his new home, Coolmore Ireland, of a heart attack. A full brother to Dansili (now retired at Banstead Manor Stud), and a product therefore of Juddmonte breeding, his death was certainly a great loss.

Champs Elysees brought the same genetic riches to breeding as Dansili, so long the touchstone of Juddmonte pedigrees. By Danehill, whose father, Danzig, may have been outshone in terms of pedigree by his dam, Razyana, out of His Majesty, and by Spring Adieu (Buckpasser/Natalma), Razyana makes Danehill 3 x 3 Natalma on the zigzag, through her son Northern Dancer and her daughter Spring Adieu. Champs Elysees’ and Dansili’s dam, Hasili (also the dam of Cacique and Intercontinental, among others—a true Blue Hen herself), brings together, in her sire, Kahyasi, Nijinsky II and Blushing Groom, one of the strongest nicks of closely related sires available to pedigree planners, adding of course, through Nijinsky, another dose of Natalma. Champs Elysees’ third dam is the Roberto mare Sookera, adding Hail to Reason to a strand of Djebel via High Line, the second broodmare sire of the stallion, again bringing closely related sire lines together.

The fourth dam of Champs Elysees was Irule, who proffers, off of Way to Paris’s five-generation pedigree, page both a dose of Grey Sovereign, which will be twinned in the dams’ side, and Round Table, Princequillo’s best son. Princequillo will also be important in the dams’ side of Way to Paris, as well as a profound way back to Princequillo through Sir Gaylord, whose dam may be the best Princequillo mare of all time, Somethingroyal; both Grey Sovereign and Princequillo account for a good deal of Cozzene’s greatness, as he is the sire of Champs Elysees dam, Grey Way, though even these elements in Cozzene’s pedigree are no match for the strength of the white stallion’s dam, Ride the Trails.

Ride the Trails, by Prince John and out of the Sir Gaylord mare Wildwook (note the zigzag inbreeding to Princequillo), is important because Wildwook’s dam is Blue Canoe (1958), a half-sister to Fall Aspen, a true Blue Hen whose offspring include Colorado Dancer (the dam of Dubai Millennium), Timber Country (Champion Two-Year-Old and G1 winner in the United States), graded stakes winners Prince of Thieves and Bianconi, and other notables. Fall Aspen was out of the daughter of Portage, Change Water, by Swaps, while Blue Canoe was out of the War Admiral mare Portage herself, though Fall Aspen was by Pretense, while Blue Canoe was by Jet Pilot.

Fall Aspen, Kentucky Broodmare of the year in 1994, was the better producer, but Blue Canoe provided something else to her offspring: a tail female line, via Jet Pilot, to Frizette (1905), the Blue Hen tail female of North American sires Seattle Slew, Mr. Prospector, and Forestry. Plus, Cozzene provides a twinned thread of Gray Sovereign, making Way to Paris 7 x 5 Gray Sovereign. Cozzene was indeed a masterpiece of pedigree design. And this horse could be no other color than the gray/white of Cozzene and Grey Sovereign.

But so was Way to Paris’ dam, Grey Way. Her dam, Northern Naiad, is by Nureyev, adding another dose of Natalma, or course, but also his Blue Hen dam, Special, from the tail female line of Rough Shod II. And her dam, Fascinating Trick, is by Buckpasser, providing the twin dose from the sire’s side, and the powerful thread of La Troienne on his dams’ side. But here’s where things become truly interesting: Grey Way’s third dam is Intriguing, by Swaps and out of Glamour, the great granddaughter of La Troienne herself, making Way to Paris tail female La Troienne.

Talk about mare power. This pedigree has it all: Hasili, Somethingroyal, Natalma, Portage, Rough Shod II, La Troienne, and of course, the breed-changing Frizette. The true miracle is that it took him this long to win a Group One race. When he retires to stud, this unique pedigree filled with tail female Blue Hens, ideal for any mare with Mr. Prospector, Seattle Slew, or Forestry in her pedigree for added Frizette, may make him a star.