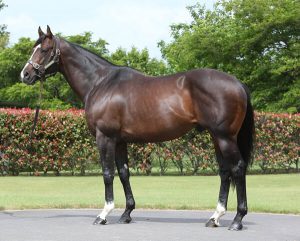 All of us who believed with all our hearts that Siskin couldn’t be beaten: think again. In the 2020 Sussex S.-G1 at Goodwood, Siskin eked out a second, while Shadwell’s Mohaather, by Showcasing and out of Roodeye by Inchinor, won convincingly.

This should not have been a shock, as Mohaather’s full sister, Prize Exhibit, was a multiple Group Two winner, and was Group One placed. The cross has been proven to work. Mohaather’s record is currently 8/5/1/0, for just under £700,000 of earnings, and is being pointed to the upcoming Queen Elizabeth II S.-G1 by his trainer, Marcus Tregoning. Sheikh Hamdan bin Rashed Al Maktoum must be very pleased with what for him was a bargain purchase, at Tattersalls October Yearling Sale 2017, from Book 2, just over £100,000. A Maktoum buying from Book 2 is enough of a surprise, as they generally battle for the top lots in Book 1, but the Sheikh has found himself a diamond in the rough here.

Showcasing (2007) stands at Whitsbury Manor Stud in England for £55,000, and is already the sire of exciting young stallion Advertise (2016), plus two Commonwealth Cup-G1 winners, Advertise himself, and Quiet Reflection. Though he didn’t earn much at the track, his exquisite Juddmonte breeding makes him a desirable mate for a wide range of mares.

His three top winners, Mohaather, Advertise, and Quiet Reflection, have dams’ sides that are entirely different, with Advertise being out of a Pivotal mare, Quiet Reflection out of a Haafhd mare, and Mohaather out of an Inchinor mare. That this Inchinor mare has also produced a stakes winning filly by Showcasing underscores the importance of this cross. It should be noted that Showcasing brings two strands of Somethingroyal via Sir Ivor and Drone, which must be considered significant.

This is especially the case with Mohaather. Inchinor is out of a Lomond mare. Lomond was by Northern Dancer, and out of the dam of Triple Crown winning Seattle Slew, My Charmer. Secretariat and Seattle Slew crossed very well, and what we’ve got here is a bet that their dams’ sides were the reason. Add in more Princequillo, top and bottom, via Mill Reef and Sir Tor, and the chances that this nick will be successful are multiplied.

Mohaather is inbred to Northern Dancer through the usual suspects. We find Danzig, Lyphard (twice), The Minstrel, Lomond, Nijinsky II and Nureyev, making him 5 x 6 x 6 x 6 x 5 x 7, quite a collection. The Turn-to in Showcasing, through Sir Gaylord and Roberto, complement the Klairon through Lorenzaccio, with that wild card of Warning thrown in on the sires’ side with its dose of the tough In Reality line and the brilliance of Warning’s Roberto dam, Slightly Dangerous. The Minstrel, in Showcasing, and Nijinsky II, in Mohaather’s dam, Roodeye, are closely related, further balancing this pedigree.

In Mohaather dams’ side, there is a hidden, unusual Blue Hen: Feola (1933) on the zig zag, via her grandson, Roundtable, twice, and her granddaughter, Pitter Patter. The third dose is through Poker, the broodmare sire of My Charmer and a son of Roundtable. One dose of Feola is anomalous enough these days; three doses are a cornucopia. Double breeding Feola seems to ensure greatness: consider Nashwan, who was double-bred Feola. Feola was by Friar Marcus, out of Aloe, and is all but lost today, except right here in Mohaather, where she hides in the twilight of his pedigree. Feola is also important in the pedigrees of Pebbles and Nishapour, among others.

Now we have the exciting match-up of Mohaather with Siskin to look forward to, which will surely yield more great races. The shadows of Seattle Slew and Secretariat, along with long lost Feola, enlighten this pedigree, and make Mohaather something of a collector’s item discovered in someone’s attic. We look forward to the Queen Elizabeth II S.-G1.