Pedigree Review: Persian King and Even So 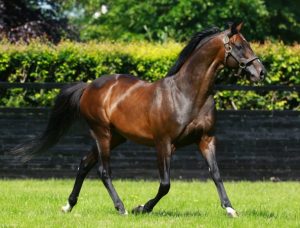 Amidst all of the posh-pedigreed Aidan O’Brien trainees entered in the Irish Oaks-G1, Even So prevailed on July 18. Though owned by Coolmore associates (Susan Magnier and Linda Shanahan), the filly was trained by Ger Lyons and ridden by Colin Keane. Even So’s sire, Camelot, (pictured) entered stud (at Coolmore) in 2014, and has made a good start, though Even So is clearly his star performer. Similarly, the very next day, Persian King, by star young sire Kingman, won the Prix D’Ispahan-G1 at Chantilly, proving his superiority over a decent field. To have two Group One races in one weekend, with neither won by an offspring of Galileo or Dubawi, nor trained by Aidan O’Brien, is semi-miraculous .

Kingman, who went to stud in 2015 and whose offspring clearly looked the part as soon as they hit the sales from the prices they were fetching, was Champion Three-Year-Old in Europe and Champion Three-Year-Old Miler in Europe, so his prowess on the track did not go unrecognized, and was assumed to be inherited by his first crop, of which Persian King is a member. Kingman currently stands at Banstead Manor Stud (Juddmonte) in Suffolk, England, for £150,000. He is already the sire of 34 black type horses, and Persian King is joined by Fearless King as a Group One winner. By Invincible Spirit and out of the Zamindar mare Zenda, his pedigree offers inbreeding to Somethingroyal, through her daughter Secrettame and through her son, Sir Gaylord, plus the dose of the Blue Hen Courtly Dee through her daughter Foreign Courier. He is 5 x 6 x 6 x 5 x 6 Northern Dancer, through such disparate yet complementary sources as Danzig, twice, The Minstrel, Lyphard and Storm Bird, and is noticeably lacking in Nijinsky II and Blushing Groom, which should add considerably to his pedigree.

Kingman also has Mr. Prospector in the fifth position of his pedigree, and Sharpen Up in the fifth, adding a rogue dose of Raise a Native to the mix. His third dam, Bahamian, is by Mill Reef, adding a complementary dose of Never Bend to Courtly Dee’s dose, plus another Princequillo mare, his dam, Milan Mill, adding to Somethingroyal’s Princequillo strength. But the key to Persian King’s pedigree may be in that dose of Kris, by Sharpen up and out of Doubly Sure, Invincible Spirit’s maternal grandfather.

Persian King’s dam is Pretty Please, by Dylan Thomas, who is by Danehill, and out of the Diesis mare Lagrion. Here is the absolute magic of this pedigree: Diesis and Kris are full brothers, making them 4 x 4 in Persian King’s pedigree. Diesis was an excellent broodmare sire, and this doubling of full siblings brings all of the strengths of their pedigrees, duplicated, to Persian King. We also see Danzig in the fourth position, via Danehill, just as he is in the fourth position in Kingman. To twin with the two doses of Somethingroyal in Kingman, we have two appearances by Somethingroyal in the dam’s side, via Terlingua, Storm Cat’s dam, and Habitat, by Sir Gaylord, making Persian King 7 x 6 x 7 x 7, via both sons and daughters.

When Persian King goes to stud himself, mares with both Nijinsky II and Blushing Groom will be valuable mates for him; Persian King has a strand of Blushing Groom through Rahy, and if we can include the Nijinsky II with the Storm Cat line, with which it has a strong affinity, so much the better. Persian King’s multiple doses of Hail-to-Reason and his sire, Turn-to, also warrant an affinity with any mare with Klairon, My Babu, and Ambiorix. Through Lear Fan, we have a sire who was tail female Rough Shod II, so an addition of Nureyev, a strain of Northern Dancer not yet included in the pedigree, who is also tail female Rough Shod II, should work as well.

Camelot entered stud in 2014, the year before Kingman, and there’s no denying that Even So’s victory in the Irish Oaks-G1 added to his luster. His daughter, Athena, is a Grade One winner in the U.S., and his son Wonderment, won the Criterium de Saint Cloud-G1, while his son Latrobe won the Irish Derby-G1 at the Curragh. His son Russian Camelot is a Group One winner in Australia, and he has multiple Group Two and Three winners. Camelot was the Champion Two-Year-Old Colt in England and Ireland, and the Champion Three-Year-Old Colt in Europe, earning just under two million pounds in his race career. So he certainly seemed a very good stud prospect. His 2020 stud fee seems reasonable at €40,000. But it was Even So’s victory over a flotilla of Aidan O’Brien’s entries in the Irish Oaks-G1 that seems to have put him on the map.

Camelot’s pedigree is less spectacular than Kingman’s, being by Montjeu out of the Danehill mare Breeze Hill. Like Kingman’s, it is rich in Northern Dancer, 4 x 5 x 6, through Sadler’s Wells, Montjeu’s sire, Kingmambo’s dam Miesque, by Nureyev, and Danzig, like Kingman’s free of Nijinsky II and Blushing Groom. The most significant feature is inbreeding to Special, from the Blue Hen lime of Rough Shod II, 4 x 6. Danehill is his third broodmare sire, through which the riches of Razyana’s pedigree are added, including that female dose of Natalma that couples with the Natalma via Northern Dancer on the zigzag. Through his fourth dams’ sire, Persepolis, we get access to Roundtable/Princequillo, and Nasrullah. Camelot has had success with Shamardal mares, due to his sires’ side Kingmambo, a perfect way to inbreed to Mr. Prospector.

Breeze Hill, Even So’s dam, is by Danehill, proffering Danehill 3 x 2, clearly an adventurous pedigree attempt, making her 5 x 3 Danzig, of course, but also 5 x 3 Razyana, who brings Ribot, Princequillo, Buckpasser and, a previously mentioned Natalma to the table. It would seem that Danehill’s powerful pedigree, even so closely inbred, can’t be matched. Breeze Hill is 5 x 4 Northern Dancer, through a son and a daughter, so whoever designed this pedigree clearly believed wholeheartedly on the zigzag pattern.

Even So’s second dam, Rose of Jericho, was by Alleged, who is closely related to Razyana, being by Hoist the Flag, whose dam, Princess Pout, was by Prince John, adding another dose of Princequillo. As well, through Hoist the Flag, we get our second dose of Ribot on this dams’ side, to add to the dose on the sires’ side through Razyana, making Even So 7 x 5 x 5 Ribot, which should certainly give her stamina. Adding more Princequillo to Camelot, via Secretariat’s and Sir Gaylord’s dam Somethingroyal, would appear to be a no brainer. Since inbreeding to Danehill/Danzig worked so well, adding in the ubiquitous Green Desert also makes sense, since his pedigree offers both Courtly Dee and Somethingroyal.

Both Storm Cat and Gone West come to mind as well, as both offer a Secretariat dam, and a dose of Somethingroyal. A Galileo mare, with his Northern Dancer sire line and his dam Urban Sea, by Miswaki (adding more Mr. P, via Miswaki, and more Buckpasser) seems perfect for Camelot. Camelot offers breeders an interesting pedigree, both for what it contains and what it is missing, and his possibilities seem nearly endless.

Persian King and Even So give us a glimpse of breeding’s future, as Galileo is aged and cannot continue breeding forever. Having these interesting young sires, bereft of Galileo, makes breeding to the raft of Galileo mares in the world a good possibility. Dubawi as well, with his Mr. Prospector and Buckpasser, also seems like a possibility, especially for Camelot. Both of these young stallions would seem to have a fruitful future before them, given the mare pool available in the UK and Europe.