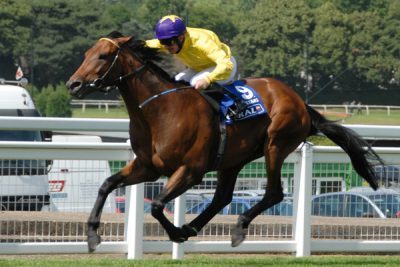 In a glorious 2020 Royal Ascot meet, one horse stood out among all others: Stradivarius, who won his third Gold Cup-G1 in a row, by ten lengths, with Frankie Dettori up. The horse put on a brilliant display of superiority and turn of foot, leaving a good field in the dust. Age means nothing to this magnificent creature: at six, he is every bit as impressive as he always has been. In his 22 starts, he has finished first 15 times, second twice, and third three times, earning over three million pounds.

By Champion Sea the Stars, who stands at the Aga Khan’s Gilltown Stud in County Kildare, Ireland, for €150,000, Stradivarius joins other Group One winners by his sire, Fifty Stars and Taghrooda in having dams’ sides featuring Sadler’s Wells, the horse’s second broodmare sire. Sea the Stars is by Cape Cross, beginning the aggregation of Blue Hen mares in Stradivarius through Sir Ivor’s granddam Somethingroyal, and Foreign Courier’s dam, Courtly Dee, who also presents the first dose of Lalun (the dam of Never Bend), by Djeddah and out of Be Faithful, by Bimelech, whose dam was La Troienne.

That is a lot of mare power via Cape Cross alone, but Sea the Stars’ dam is one of the greatest mares of all time herself, Urban Sea, by Miswaki, also the dam of Galileo. Miswaki’s dam, Hopespringseternal, was by Buckpasser, adding yet another strong dose of La Troienne, out of the Princequillo mare Rose Bower (twinning with the already mentioned Princequillo mare Somethingroyal). The presence of Turn-to through Sir Gaylord, Djeddah through Lalun, and Klairon through Lorenzaccio should also be pointed out, because of complementary, closely related horses in Stradivarius’ dams’ side.

Before examining the dams’ side of Stradivarius, it should be noted that he is inbred 5 x 5 x 4 to Northern Dancer, meaning of course that he has three strands of Natalma, the pre-eminent daughter of Almahmoud (whose other important daughter, Cosmah, was the dam of Halo). Private Life, Stradivarius’ dam, was by Bering, whose pedigree brings with it an important influence on Stradivarius.

By Artic Tern, and out of the Lyphard mare Beaune, clearly one of the strains of Natalma is immediately visible in Lyphard’s sire, Northern Dancer. But hidden in Artic Tern’s pedigree is another, rogue dose of Almahmoud, through her lesser known daughter Bubbling Beauty, giving this pedigree access to Almahmoud on the zig-zag, through both grandsons and this unique daughter. Beaune is also a granddaughter of the great stamina influence, Le Fabuleux. I was lucky enough to own one of the last Le Fabuleux mares, and she was drop dead gorgeous: a huge, bright chestnut with socks and a stripe, and enormous bone. She looked like she could’ve run all day.

Stradivarius’s second dam is Poughkeepsie, by Sadler’s Wells (as mentioned above, a terrific nick for Sea the Stars), and thanks to the latter we get yet another dose of Blue Hen heritage, through his dam, Fairy Bridge, who is tail female Rough Shod II. As well, thanks to Sadler’s Wells, we get Hail to Reason/Turn-to through Fairy Bridge’s sire, Bold Reason, and yet another dose of Lalun, the dam of Bold Reason, making the collection of Djeddah, Klairon, and Turn-to, all closely related, more powerful, and adding yet another dose of La Troienne. Stradivarius sports a pedigree demonstrating numerous classic, powerful nicking patterns plug a collection of mare power that cannot be denied.

We can only hope he’ll return to Royal Ascot, at 7, to win his fourth Gold Cup in a row. Just as once you’ve played a Stradivarius, no other violin will do, the equine Stradivarius has stamped the Gold Cup as his own, uniquely thrilling race. In 2021, no other horse will do.