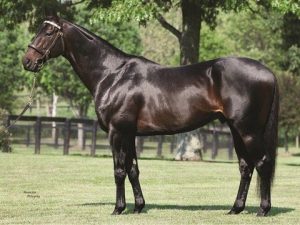 When unbeaten Siskin was named the Kentucky Thoroughbred Champion for Racing Abroad, his pedigree demanded investigation, especially as he is from the illustrious Juddmonte breeding program. In my opinion, this is the best breeding operation in the world, partially because it has developed some of the most impressive and productive female families in the stud book, and partially because of its racing success. Juddmonte’s owner, Prince Khalid Abdullah, seeks no press or celebrity for himself; he lets his horses do the talking.

Three-year-old colt Siskin embodies the Juddmonte program, as his sire, First Defence, was bred by Juddmonte, as was his entire female family (Juddmonte acquired his third dam, Monroe, privately), including his stellar broodmare sire, Oasis Dream, and his equally heralded second broodmare sire, Zafonic. More than this, Siskin’s second dam is a full sister to Champion Xaar, while she herself is a half-sister to the dam of Close Hatches, the Champion Older Female Dirt Horse of 2014, multi-millionaire, and multiple Grade One winner, including wins over Champion Beholder and Princess of Sylmar. Close Hatches has already had success as a broodmare: her first foal, Tacitus (Tapit), won at first asking, and also won the Wood Memorial H.-G1 (while finishing third in the Kentucky Derby-G1 and second in the Belmont S.-G1).

This kind of breeding and racing success epitomizes the Juddmonte program. It must be noted that Close Hatches is, like Siskin, by First Defence, making the two close genetic relatives, with only their broodmare sires differentiating them, though both Storm Cat, Close Hatches’ broodmare sire, and Oasis Dream, Siskin’s, are from the Northern Dancer sire line, and feature prominent doses of Somethingroyal, through Storm Cat’s dam, Terlingua, a Secretariat mare, and through Courtly Dee’s daughter by Sir Ivor, Foreign Courier, as well as through Drone, a grandson of Somethingroyal, via his sire Sir Gaylord. In fact, Siskin is inbred to Somethingroyal 7 x 8 x 7 x 6, all on his dams’ side, with the extra doses coming through Gone West’s Secretariat dam, and another dose of Sir Ivor, through his Blue Hen daughter, Monroe.

At two, Siskin was unbeatable, except by his own temperament. He won the Group One Phoenix S., the Group Two Railway S., and the listed Marble Hill S., all at the Curragh, for earnings of £263,486. In his final race of the year, the Middle Park S.-G1 at Newmarket, something flustered the previously professional juvenile, and, though highly favored, he was withdrawn from the race due to his very unruly, naughty behavior in the stalls. Before he is allowed to race again, he must pass a stalls test. His connections were utterly bewildered by this bad behavior.

First Defence (2004), Siskin’s sire, is by Unbridled’s Song, out of the Grade One winning Seattle Slew mare Honest Lady, though it is Honest Lady’s dam, Toussaud, Kentucky Broodmare of the Year, who lights up this pedigree. First Defence had no other offspring anywhere near equal to Close Hatches, and in 2016 was exported from Juddmonte Farm in Lexington, Kentucky, to Saudi Arabia. His pedigree, though, boasts numerous doses of Blue Hen La Troienne, through Buckpasser, twice, and through Seattle Slew’s dams’ side, twice, which reach out to a tail female dose via Stolen Hour in his dams’ side.

Siskin’s fourth dam, Best in Show, was one of the greatest producing mares of all time: her offspring include Kentucky Broodmare of the Year Blush with Pride, the only mare in history to produce two Belmont S.-G1 winners, Sex Appeal (dam of both Try My Best and El Gran Senor), Minnie Hauk, and others. Herein lies the ultimate magic trick of this amazing pedigree: Siskin is double-bred Best in Show, through El Gran Senor, the sire of Toussaud, in First Defence, and through her daughter, Monroe, via Siskin’s dam, Bird Flown, making this cross on the valuable zig-zag, giving Siskin all of the genetic material offered by both male and female offspring (this latter offering the large heart gene).

Part of Juddmonte’s breeding genius is a lack of fear of breeding European lines with North American lines, to vary the gene pool and make bold statements. Unbridled’s Song and Seattle Slew are as North American as one can get, while El Gran Senor and Oasis Dream represent Europe. Zafonic, by North American sire Gone West, is out of a The Minstrel mare, Zaizafon, from a British dams’ side. And it all succeeds, though one must say that the basic principle Juddmonte works from is to utilize, as much as possible, the great mares, such as Toussaud, Best in Show, Somethingroyal, and La Troienne. Juddmonte’s innovative approach to pedigree design demonstrates what historical knowledge coupled with imagination can create: a three-year-old like Siskin. We await his 2020 debut.