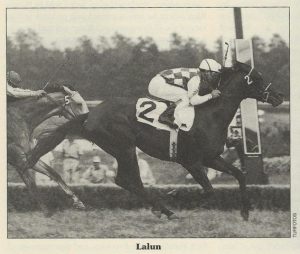 Though we have featured Enable in these pages before, her magnificent performance against Coolmore’s best boys (Sovereign and Japan), winning the 2020 King George VI and Queen Elizabeth S.-G1 for the third time in a row, by 5 ½ lengths, made ignoring her an utter impossibility. It is said that her next out may be the Group One Yorkshire Oaks, in which she might meet the world’s other super-filly, Love. What a battle between goddesses that will be!

In a previous column in 2019, the audaciousness of her pedigree in its daring inbreeding to Sadler’s Wells 3 x 2, insured that nicking programs would award her with an F rating, but I will believe Juddmonte’s brain trust any day over a computer program. In fact, her AEI, for Nathaniel being mated to Sadler’s Wells mares, which has been attempted only once, to create her, is an unbelievable 105.72 (remember, an AEI of one is considered average).

There are far more fascinating insights to be had regarding Enable’s pedigree, and because I sincerely hope that I will be inspired to write about her again (I hope following her third Arc win this year), I’d like to highlight a few of them.

Enable is inbred to the great mare Lalun three times, twice through Lalun’s son, Bold Reason, the broodmare sire of Sadler’s Wells (the result of mating with Hail to Reason), and again through her son Never Bend (by Nasrullah). Lalun (1952) was a serious race mare, winning the Kentucky Oaks-G1, the Beldame S.-G1, and finishing second in the CCA Oaks-G1 in 1955. Her career as a broodmare was equally stellar. She was the dam of twelve foals, the best five that produced stakes winners being She Alone (1958, by Nasrullah, a full sister to Never Bend), Never Bend (1960, by Nasrullah), by whom the great Mill Reef and the Blue Hen broodmare Courtly Dee would result, Bold Reason (1968, by Hail to Reason), Sadler’s Wells’ broodmare sire, Class is Class (1969, by Graustark), and Fabled (1973, by Illustrious). It should be noted that Nasrullah and Hail to Reason are genetically closely related, and complement each other well. Enable’s pedigree is 6 x 5 x 6 Lalun.

Lalun was by Djeddah, whose sire was Djebel, making her particularly receptive to Djebel’s close genetic relative Turn-To; hence Hail to Reason, and his father, Turn-to, who appears via Sir Gaylord in her dams’ side, were a good part of what made Lalun such a superior broodmare. Djebel was by Tourbillon, whose dam was Durban (1918), by Durbar II and out of Banshee. Durban had a full sister, Heidifann (1921), and she is Djeddah’s second dam, making Lalun 4 x 3 to the full siblings on her sires’ side, on the highly sought-after zigzag. Another zigzag occurs with Teddy (1913), certainly a seminal sire in thoroughbred pedigrees. He is the sire of Djeddah’s broodmare sire, Asterus, but, more importantly, he is also the sire of Blue Hen La Troienne, featured in this pedigree as the dam of Bimelech, Lalun’s broodmare sire.

One more Blue Hen mare features powerfully in Lalun’s pedigree: Frizette (1905), a breed-changing mare who is the tail female relative of Mr. Prospector, Seattle Slew and Forestry. We have in Lalun’s sires’ side Frizette 6 x 5, both times through her daughter Banshee. Frizette was a super-fast race filly, so she certainly had the huge heart gene, and passed it on to her daughters, so the two threads of Banshee/Frizette become significant in the creation of a race mare like Lalun, and her contemporary relative, Enable.

Enable always demonstrates she has heart to spare. Frankie Dettori rode her so casually that she was many lengths back, for the first 2/3 of the race, barely using her. But when it came time to catch the leader, Sovereign, Dettori shook his reins slightly, and Enable took off, eventually winning by 5 ½ lengths with ease. The boys were no match for her. We can only be thankful that Juddmonte went out on a limb with this F -rated pedigree, and created something as spectacular as Enable, collecting so many important Blue Hen mares to lurk in the shadows of her pedigree, confounding computer programs but not the human eye.