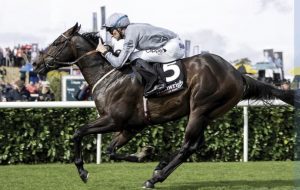 New for 2020 is the young stallion Soldier’s Call, standing at Ireland's Ballyhane Stud, for a fee of only €10,000. A son of Showcasing, his sire line contains many expected and powerful crosses to Northern Dancer, through Danzig, Lyphard (twice), and The Minstrel, though it’s worth noting that the Danzig passes through the great Green Desert, who seems to have become a thing unto himself in pedigrees, given the wealth of mare blood—Natalma, Somethingroyal and Courtly Dee—that defines him. There are two doses of Never Bend in this sire line, through the aforementioned Courtly Dee, a daughter, and Mill Reef, a son, so we have the zigzag formation which imparts the strengths of Never Bend best.

Showcasing’s dam was Arabesque, a daughter of Zafonic, by Gone West, out of The Minstrel mare Zaizafon. Certainly, we get our first thread of Native Dancer through Mr. Prospector, in Gone West, and we get another thread of Somethingroyal, through his Secretariat dam, Secrettame. But what’s truly fascinating is a doubling of Secrettame’s dam, Tamerett, through Gone West and also through Known Fact, a son of Tamerett, whose son, Warning, is Showcasing’s second broodmare sire. Tamerett presents intense inbreeding to Bull Dog, enhanced by the presence of Bull Dog’s half-brother, Bois Roussel, and Known Fact’s sire, In Reality, offers even more Bull Dog. The dam of Bull Dog and Bois Roussel was the Spearmint mare Plucky Liege, and in any pedigree, on either side of the Atlantic Ocean, the more Plucky Liege, the better.

It’s worth noting, before turning to Soldier’s Call’s dams’ side, that the speedy mare Slightly Dangerous, by Roberto, is the dam of Warning. Thus, the abundance of Nasrullah blood in Showcasing is balanced by his close genetic relative, Turn-to (through Hail to Reason in Roberto, and Sir Gaylord in Green Desert. This will become significant when examining the dams’ side of this young stallion.

Dijarvo is the dam of Soldier’s Call, and she is by Iceman, out of the Wolfhound mare Thicket. The first anomaly in her pedigree is that she is 4 x 4 Nureyev, as her sire is the son of Polar Falcon (and Nureyev grandson) Iceman, while her dam Thicket, is by the son of Nureyev, Wolfhound, giving Soldier’s Call six crosses of Northern Dancer (including the addition of Nijinsky II in this dams’ side). Nureyev, of course, was by Special, a mare from the Blue Hen line of Rough Shod II, adding to the mare power in this pedigree, as Soldier’s Call is therefore 5 x 5 Special.

Iceman’s pedigree is where things begin to become truly interesting. As noted, he is by the Nureyev’s son Polar Falcon. His dam, Virtuous, was by the French stallion Exit to Nowhere, and out of the Shadeed mare Exclusive Virtue. I must confess to having a soft spot for Exit to Nowhere, as one of my favorite mares that I have owned was by him; she was a totally adorable creature with as much personality as most humans.

Her Group One, millionaire mother certainly made me interested in purchasing her, but Exit to Nowhere sealed the deal, as he was by Irish River, and out of Coup de Folie. Ring a bell? Coup de Folie, in 1987, gave birth to a colt, sired by Mr. Prospector, who would become Machiavellian. In 1988, she foaled Exit to Nowhere. Thus, in the pedigree of Virtuous, we have the closely related Klairon (in Irish River), Turn-to (through Halo and his sire, Hail to Reason), and through Shadeed, a strain of Damascus (and therefore My Babu, the third of these near-triplets) via Shadeed’s dam, Continual.

The second strain of Nureyev in Soldier’s Call’s dams’ side is through Wolfhound, a son of the mare Lassie Dear, from the immediate family of the magnificent A.P. Indy. Lassie Dear was by Buckpasser (an addition of North American dirt speed to complement the In Reality on the sires’ side), out of the mare Gay Missile. Through her, we get more Somethingroyal, as Sir Gaylord was this mare’s sire, more Turn-to, and more My Babu.

Soldier’s Call, who was the French Champion Two-Year-Old and a Group Two winner, is certainly ripe for mares featuring even more inbreeding to Northern Dancer, through such stalwarts as Galileo and his sons, sons of Scat Daddy, and more doses of Danzig and Nijinsky. Dubawi also comes to mind as a broodmare sire to reckon with for Soldier’s Call, given his wealth of Northern Dancer, and being a grandson of Seeking the Gold, complementing the Mr. Prospector and Buckpasser in the young stud’s pedigree. However, the most fascinating cross would be through mares by Machiavellian, because of the doubling of Coup de Folie, or by his son Street Cry, or by any sons of Street Cry. Shamardal mares would be ideal, offering both the Storm Cat and Street Cry’s full sister. My Exit to Nowhere mare was snapped up by Darley to be included in Street Cry’s first year book of mares because of this element to her pedigree (and her illustrious dam, of course). Soldier’s Call would seem to present both value and pedigree to his own first book of mares, a rare combination.