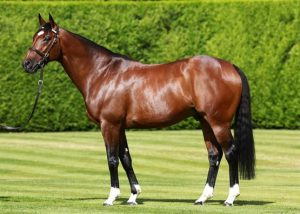 Might Prince Khalid Abdullah and his Juddmonte enterprises have another Enable in their spectacular stable? Quadrilateral won the Fillies Mile-G1 at Newmarket on October 11, becoming the latest Group One winner for stellar young sire Frankel, whom Juddmonte also bred and raced.

Frankel, who went to stud in 2013 after a racing career that could only be dubbed other-worldly (14 wins from 14 starts, two Championships, a list of Group One wins that includes nearly every famed race in Europe and the UK), was named after the prince’s longtime trainer and friend Bobby Frankel, after he passed away. Supposedly, Abdullah had been waiting on a uniquely gorgeous colt to name after the legendary trainer, and his judgement of horse flesh turned out to be spot-on.

Frankel now stands at Banstead Manor Stud in England, for £175,000, and seems a bargain, as he turns out Group and Listed stakes winners at an amazing rate. His younger brother, Noble Mission, standing at Lane’s End in Kentucky, is a leading freshman sire as well.

Quadrilateral, a foal of 2017 and therefore a member of Frankel’s fourth crop, is now three wins in three starts with earnings of $418,599. Underscoring her Juddmonte breeding is the fact that she is out of a Mizzen Mast mare, Nimble Thimble. The exquisite gray stallion is by Cozzene, out of the Graustark mare Kinema, and has sired Group and Graded winners on both sides of the Atlantic and Pacific, and stands at Juddmonte Farm in Kentucky. Her second dam, Skiable, has numerous black type winners under her name, and her third dam, Kerali, gave birth to Juddmonte stallion Hasili, who was bred on a similar cross to Quadrilateral, being by a grandson of Nijinsky II, just as Quadrilateral is out of a great-grand-daughter of the still influential Nijinsky II.

The sire lines of Enable and Quadrilateral are remarkably similar, as Frankel is a grandson of Sadler’s Wells, while Enable’s sire, the promising young stallion Nathaniel, is, like Frankel, a son of Galileo, and therefore a grandson of Sadler’s Wells. Quadrilateral is inbred 4 x 5 x 5 to Northern Dancer; Enable is similarly inbred to Northern Dancer 4 x 3 x 6. Both runners have Tom Rolfe in the sixth position in their pedigrees, as well as a dose of Roberto.

Quadrilateral’s pedigree, however, has one fascinating aspect that Enable’s doesn’t have. She is inbred, 5 x 4, to the full brothers His Majesty and Graustark, both by Ribot, ensuring a foundation of stamina that should allow her to move on to longer distances with ease. As well, her pedigree features the classic cross of Nijinsky II and Blushing Groom, through Rainbow Quest in Frankel. Also noted should be the presence, in Frankel, of another stamina influence, Stage Door Johnny, by Prince John, which is twinned with the Prince John mare Ride the Trails, the Blue Hen dam of Cozzene.

Juddmonte has done it again, creating bold pedigree perfection. Might we see Quadrilateral at a future Prix de l’Arc de Triomphe? The distance, and even soft going, should not be able to defeat her. Let’s hope we do get this opportunity.