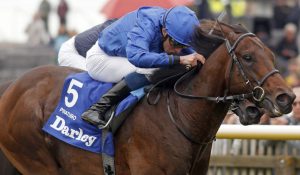 Pinatubo, bred and owned by Godolphin, won the Dewhurst S.-G1 on Saturday, October 12, to keep his perfect record of six starts and six wins intact and to underscore his claim to the Champion Juvenile Colt of 2019 title.

Pinatubo is by Shamardal, who also won the Dewhurst S.-G1 at two, along with five other Group One events in his career. Shamardal stands at Darley’s Kildangan Stud in County Kildare, Ireland, for a private fee. He is one of those incredibly well-bred horses, being by Giant’s Causeway, out of a full sister to Street Cry.

Before we go on, my disclaimer: I have long followed with fondness the career of Shamardal. I fell madly in love with Giant’s Causeway when he first came to stud at Coolmore America, as I have never seen a more perfectly made horse. You couldn’t fault him. He was the epitome of handsomeness and correctness. I was lucky enough to breed two clients’ mares to him, and get two beautiful fillies from the matings.

More than this, though, I owned a mare by a half-brother to Street Cry and Helsinki, the French stallion Exit to Nowhere, out of a million-dollar earning, G1 winning mare, whom I acquired by waiting all day for one of the last lots at a Fasig-Tipton sale in Lexington. The crowd had thinned, and no one else seemed to want this extraordinary filly who wasn’t in foal. Immediately after I purchased her, someone offered me twice what I’d paid. I knew she was a prize.

Exit to Nowhere was by Irish River, whose pedigree and looks I had also long admired. Street Cry was racing at the time, and captured my imagination as a potential mate for my filly, because of the double-breeding to Coup to Folie, which also offers inbreeding to the great Almahmoud through her two best daughters, Natalma and Cosmah, plus the addition of the riches of Irish River’s unique pedigree.

When Street Cry’s retirement was announced, I instantly called Darley Stud in the Bluegrass, and told them I had the perfect filly for him, but that I couldn’t afford his stud fee. They agreed to look at my girl’s pedigree, and offered to let me pay the stud fee out of proceeds from the sale of either a weanling or yearling. Unfortunately, this wonderful filly was ill-fated, and I never got a foal out of her. 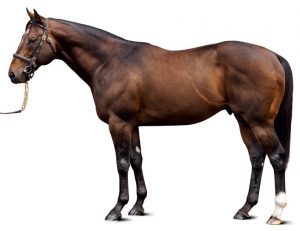 Hence my interest in Shamardal, who, after beginning his stud career in 2005, has sired 21 Group One winners, and whose sons, such as Lope de Vega, are now beginning successful careers at stud as well. Shamardal was Champion Two-Year-Old Colt in Europe, just as his son Pinatubo seems fated to be, and Champion Three-Year-Old Miler, with a near-perfect career of seven starts and six wins, earning just over a million pounds. If the best milers make the best sires, Shamardal is proof of that old saw.

Pinatubo has been compared to Frankel who in his two-year-old campaign was also unbeaten, and not even the very soft going at Newmarket could defeat him, as soft going deprived Enable of her third Arc. With William Buick up, the colt persevered against an army of first-rate Coolmore colts, and won by two lengths. His trainer, Charlie Appleby, says that, at home this is the laziest colt he’s ever seen - all he does is eat and sleep. Clearly, though, Pinatubo understands what racing is all about, as Buick has praised his mind as “brilliant.”

Inbreeding to both Northern Dancer, through Storm Cat and Sadler’s Wells, and to Mr. Prospector, through Machiavellian and Miswaki, influences this pedigree. But as is so often seen, it is balanced inbreeding to closely related Nasrullah and Turn-to that pulls it together, through Blushing Groom, Halo and Roberto on the sires’ side, and through Mill Reef/Never Bend and Habitat (by Sir Gaylord, out of arguably the Blue Hen of the twentieth century, Somethingroyal).

The addition of a wild strain of Native Dancer, through the sire of Pinatubo’s third dam, Kris, adds yet another thread to this tapestry. It must also be noted that a doubling of Somethingroyal, top and bottom, occurs through Storm Cat’s Secretariat dam, Terlingua. This pedigree represents the best of both North American and European bloodlines, blended into this spectacular colt.

Kudos to the Godolphin pedigree team, who collected, in Pinatubo, an array of most of the best mares of the twentieth century: the aforementioned Somethingroyal, Ballade, Coup de Folie, Roughshod II, and of course La Troienne. And we fans have Pinatubo’s three-year-old campaign to look forward to. In the meantime, may I suggest that someone bring an Arch mare to Shamardal? His sireline, Turn-to, and his dams’ side, with the powerful Courtly Dee (by Never Bend), are a perfect complement to Shamardal, and if this imaginary mare had both Northern Dancer and Mr. Prospector in her tail-female line, all the better. After examining the pedigrees of his stakes-winning and stakes-placed progeny, it would seem that this mating has not been attempted. The resulting foal might just be extraordinary.