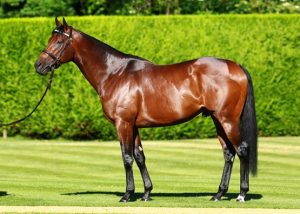 Listening to post-yearling sale season chatter, the name on most lips seems to be Kingman. With his first and second crops excelling at the track (he is leading second season sire), prominent and respected buyers and bloodstock agents declare frequently that the best yearling they bought this year was by Kingman. Standing at Juddmonte’s Banstead Manor Stud in Suffolk, England, for £75,000 in 2020, Kingman would seem to be the next jewel in Juddmonte’s crown, with four Group winners from his first and second crops, and innumerable listed winners and Group placed horses.

Kingman earned just under one million pounds at the track, including four Group One wins at three, making him both the Champion Three-Year-Old Colt and Champion Three-Year-Old Miler in Europe. By legendary sire Invincible Spirit and out of the Zamindar mare Zenda, Kingman’s pedigree features inbreeding to Northern Dancer 4 x 5 x 5, through Danzig, The Minstrel and Lyphard, as well as inbreeding to Never Bend,5 x 5, through his son, Mill Reef, and his Blue Hen daughter, Courtly Dee.

His pedigree also contains three strains, 6 x 6 x 6, of another Blue Hen, Somethingroyal, through her grandson Sir Ivor (by Sir Gaylord), her most famous son, Secretariat, and another grandson and son of Sir Gaylord, Drone. There is also inbreeding to Native Dancer, through Sharpen Up on the sires’ side, and Mr. Prospector on the dams’ side. Tamerett, the granddam of Gone West, supplies a hefty dose of the full brothers Bull Dog and Sir Gallahad III, and their half-brother Bois Roussel, incorporating North American grit into this otherwise European pedigree.

From Sir Gaylord, we gain access to his sire, Turn-to, complementing the Nasrullah in Never Bend, and crying out for the addition of either My Babu (Djebel) or Klairon, a combination omnipresent in many English and Irish stallions’ bloodlines.

The most obvious element missing from this pedigree, and the ultimate complement to Kingman, has got to be Irish River, by the Never Bend stallion Riverman, because he presents both Djebel and Klairon. The number of European stallion pedigrees he appears in is astounding, as he has almost entirely disappeared from North American breeding. For unfathomable reasons, as he was purely a turf influence, he ended his illustrious career at stud at Gainesway, in Lexington, Kentucky. But that allowed me to see him, and he remains unforgettable. His front legs were the stoutest, straightest I’ve ever seen, with improbably short, thick cannon bones; he looked like he could still run forever, though he was in his twenties. I’d put him in the Big Three of influences on European pedigrees, along with Never Bend and Northern Dancer. Indeed, in the pedigree of Kingman’s Group winning filly, Nausha, Galileo, another cross to Northern Dancer, and Irish River appear (as well as more Native Dancer).

Kingman’s other Group winners, including Group One winner Persian King, feature different variations. Persian King brings inbreeding to Danzig through Danehill, the Northern Dancer influence of Storm Cat through his magnificent son Giant’s Causeway, featuring another dose of Somethingroyal through Secretariat, and yet another dose of her through Habitat, by Sir Gaylord.

Sangarius is out of an Empire Maker mare, which adds a triple dose of a common North American influence common in European pedigrees, via Buckpasser, more Danzig, and the powerful strain of Northern Dancer that Nijinsky II provides.

Kingman’s other Group winning offspring is Calyx. His pedigree provides more Raise a Native through Mr. Prospector’s son Distant View, as well as Irish River through Distant View’s dam. Add to that a complementary dose of Turn-to, through Roberto, which reels in all the Turn-to in Kingman’s pedigree. Calyx’s second dam is New Orchid, and she provides a classic cross of closely-related sires Blushing Groom and Nijinsky II, ubiquitous in Group winning runners.

Given these parameters, one should not hesitate to bring Dubawi mares, Shamardal mares, Singspiel mares, and Street Cry and Machiavellian mares to Kingman, along with any manifestation of the great Miswaki mare Urban Sea through her sons Galileo and Sea the Stars, the latter of which provides interesting inbreeding to Green Desert. With minimal effort, it is easy to understand why Kingman is the buzz horse of the moment.