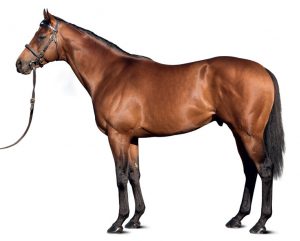 The last day of the Tattersalls October Yearling Sale usually boasts few fireworks, but a first-crop filly by young sire Territories fetched 145,000 guineas amidst spirited bidding, signaling that interest is high in this first-crop stallion. Territories stands at Sheikh Mohammad’s Dalham Stud in Suffolk, England, for a relatively inexpensive fee of 12,000 pounds. When he entered stud in 2017, he had amassed 554,020 pounds in earning, from winning the Group One Prix Jean Prat, and placing in both the 2000 Guineas-G1 and the Jean-Luc Lagardere-G1. The son of Invincible Spirit, and out of the Machiavellian mare Taranto, has a fascinating pedigree which includes Blue Hen mares Courtly Dee, Somethingroyal, Almahmoud through her daughters Natalma and Cosmah, Rough Shod II, and the fleetfooted Roberto mare Slightly Dangerous, whose influence also appears in mighty Dubawi’s pedigree. Territories’ dams’ side also features a fascinating cross: his fourth dam is Helen Street, by Troy, who was also the dam of the magnificent Street Cry, by Machiavellian, making Territories’ dam closely related to Street Cry himself.

The session topping filly’s chances improved greatly when her half-sister, Breathtaking Look, won a Group Three since the catalogue was published. Her pedigree alone should have attracted interest, however, as she in inbred to Northern Dancer through Danzig, Sadler’s Wells, The Minstrel, Nureyev and Nijinsky II, five doses of Natalma, complementing the dose of her half-sister, Cosmah, in the sire line. Inbreeding to Mr. Prospector also occurs, through Machiavellian in the sire line, and Gone West in the dams’ side. Balanced inbreeding, top and bottom, to Somethingroyal occurs through Sir Gaylord and Secrettame, with an extra dose of Princequillo, Somethingroyal’s dam, through On the Sly, added in the dams’ side.

The most interesting bit of inbreeding occurs, however, through Warning, a son of Known Fact, in Territories, and Secrettame, the dam of Gone West, in Love Your Looks. Known Fact was by the Tim Tam mare Tamerett, who was also the dam of Secrettame. Tamerett offers a double-bred wealth of inbreeding to Plucky Liege (by Spearmint), the dam of Bull Dog, who appears twice in Tamerett’s pedigree, and also of Bois Roussel, who appears through Tamerett’s dam, Mixed Marriage, creating a very smart pedigree for this filly.

Inbreeding to Turn-to should also be noted, through Sir Ivor, Halo and Roberto, complementing the dose of Courtly Dee, by Never Bend. Ribot as well appears twice, through Hoist the Flag and Tom Rolfe, ensuring this filly’s stamina, and Tom Rolfe provides another dose of Spearmint through her son Sir Gallahad III, and more Princequillo, the broodmare sire of Tom Rolfe’s second dam, How.

This Territories filly, bred by Ellis Stud and Bellow Hill, and purchased by Stroud Coleman Bloodstock, made the quotidian dullness of Tattersalls’ final day far brighter. She also foreshadows what may be a quick start at stud, in 2020, for the Darley bred Territories.