The Mysteries of Waldgeist 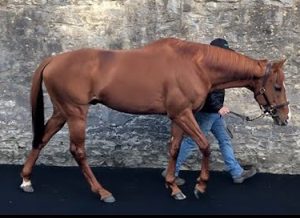 It’s hard to fathom that a son of Galileo may be the most interesting outcross among the new stallions standing at stud for 2020. Galileo’s pedigree is a template of great European breeding, featuring, of course, Northern Dancer through Sadler’s Wells, Hail to Reason, Lalun, Forli, Thong, Mr. Prospector, Buckpasser and Princequillo. Hard to devise a better pedigree. But Waldgeist, the upset winner of last year’s Prix de l’Arc de Triomphe-G1 over favored and beloved Enable going for her third consecutive win in that prestigious race, though he is by Galileo, has a dams’ side that leaves one scratching one’s head in wonderment. Standing his first year at Ballylinch Stud, Ireland, for a fee of £17,500, Waldgeist’s unusual pedigree undoubtedly caused this Arc winner’s fee to remain relatively low.

His dam, the German-bred Waldlerche, boasts a pedigree that is free, in the first five generations, of Northern Dancer, Raise a Native, any of the Turn-to/Klairon/My Babu/Ambiorix quartet, Blushing Groom…the list goes on and on. The Aga Khan’s Darshaan does make an appearance in the fourth generation, bringing along with him Shirley Heights, Mill Reef, Princequillo and Djeddah, and the mare with whom he was mated to create Mark of Esteem, Homage, adds both Northern Dancer and Native Dancer, Vaguely Noble, and Round Table to the mix, though well off the five generation pedigree page. On the five-generation page one sees inbreeding to German stalwart stallion Surumu, 4 x 4, who brings with him his own double-dose of Alchimist (1930), and Waldgeist’s dams’ side also offers a tail female ancestor by Alchimist, who contains multiple strains of the 1881 stallion St. Simon, by Galopin (1872). Having to look this far back for inbreeding in and of itself reveals what a mysterious outcross Waldgeist’s dams’ side represents.

That said, it behooves one to examine exactly what is missing from Waldgeist’s pedigree, the defining absences that are unique in European breeding. Surprising is the almost complete absence of Mahmoud from this dams’ side (excluding that one dose of Northern Dancer). Mahmoud blood permeates English, Irish and French breeding, but it would appear that German breeding eschews gray. The ubiquitous coupling of Nijinsky II and Blushing Groom is nowhere to be found, just as the omnipresent Green Desert, with his Danzig, Courtly Dee, and Somethingroyal, is missing in action. Indeed, any strain of Somethingroyal is missing from this entire pedigree. Though Turn-to through Hail to Reason, and Djebel (primogenitor of My Babu) appear, Klairon, common in European pedigrees through Ahonoora/Lorenzaccio, among others, is also missing. Native Dancer through Diesis/Sharpen up is also nowhere to be found. The single dose of Raise a Native on the five-generation chart is through Mr. Prospector’s son Miswaki.

So for a first book for Waldgeist, it truly is a matter of rounding up the usual suspects. The Storm Cat and Gone West lines immediately come to mind, for their sire lines and their Secretariat dams. Giant’s Causeway seems particularly suited, as does his wonderful son Shamardal, with his Machiavellian dam who is the full sister to Street Cry, and of course mares by Shamardal’s son, Lope de Vega, with his double-dose of Machiavellian. Green Desert is a must, and even the most overwhelming accretion of Northern Dancer blood must not be feared here. The vast array of mares who might make an impressive foal with Waldgeist can only be imagined. Students of pedigree will long to examine this first book of mares, to determine who has made the cleverest guess.