The Wonderful Outcross Possibilities of Study of Man 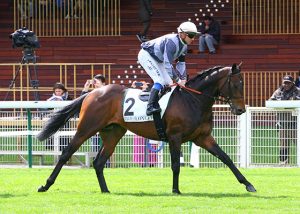 A new stallion for 2020 at Lanwades Stud, in Newmarket, Study of Man stands for only £15,000. He won the Group One Prix du Jockey Club and the Group Two Prix Greffulhe, and made over £1million, and emerged from the prestigious Flaxman Stables breeding program. But none of this sets him apart from other stellar young prospects. What does set him apart is his outcross pedigree, and his mare power.

Study of Man is by Japanese super stallion Deep Impact, a multiple champion and perennial leading sire in Japan, and his sire is another perennial leading sire during his reign in Japan, the American-bred Sunday Silence. The story about the lack of interest in Sunday Silence as a sire in North America, and his exportation to Japan where he ruled the thoroughbred world, is the stuff of myth at this time. Study of Man is the only son of Deep Impact standing at stud in Europe, and he brings his Halo sire line with its important dose of Cosmah, the dam of Halo, by Almahmoud, to complement all of the strains of her half-sister, Natalma, available through all of the Northern Dancer in European breeding, as Natalma was the great one’s dam. Deep Impact’s dam was the Alzao mare Wind in Her Hair, instantly reaching out to the Cosmah through Lyphard, a son of Northern Dancer, and providing this pedigree’s first dose of the great Somethingroyal, through her grandson Sir Ivor, and her son, the Turn-to stallion Sir Gaylord, also complementing the Turn-To in Halo.

Study of Man’s dam is the Storm Cat mare Second Happiness, bringing in another dose of Northern Dancer through his son Storm Bird, and another dose of Somethingroyal through her son, Secretariat, the sire of Storm Cat’s dam, Terlingua. The balance between the top side and bottom side of Study of Man’s pedigree is instantly evident. And we haven’t even gotten to the best part.

Who is Study of man’s second dam? None other than one of the greatest mares of all time, the dam of the magnificent Kingmambo, Miesque: Champion, millionaire, two-times winner of the Breeders’ Cup Mile-G1 against the boys. Miesque was one of those rare mares whose brilliance on the turf was equaled by her brilliance in the breeding shed, and her influence is still felt today, though she was from the foal crop of 1984.

When I worked for the famous equine podiatrist, Dr. Ric Redden, I chanced to see in his appointment book that Miesque herself was being brought in for shoeing one day. Thrilled, I snuck into his surgery room, to get a glimpse of the goddess. What I saw was a small, plain, brown mare whom no one would pick out, in a paddock, as being special. She stood calmly for her shoeing, understanding that mortals must work on her and she must suffer them. A real lesson in the relationship between books and their covers.

Access to Miesque’s immediate family is a thing to be acquired, and now Study of Man presents himself in Newmarket with just that. Miesque was by Nureyev, providing another dose of Northern Dancer to this pedigree, as well as the tail-female Rough Shod II, Thong. Miesque’s dam, Pasadoble, was a granddaughter of Graustark, providing toughness and stamina which Miesque herself demonstrated over and over again. Tourbillon, complementing the Turn-to on the sires’ side, Mahmoud, and Miesque’s third dam, Neriad, a Princequillo mare complementing the greatest Princequillo mare, Somethingroyal, make cameo appearances deep in the pedigree.

What makes Study of Man especially appealing to the mare pool is that he is free of any strain of Danzig, Sadler’s Wells, Nijinsky II, Blushing Groom, and Mr. Prospector, making him attractive to a majority of European broodmares. The thought of adding some Green Desert or Galileo or Machiavellian (with his own dose of Halo) or Gone West is thrilling, and one shouldn’t hesitate to add mares by the Scat Daddy line, getting Storm Cat on the zig zag. The opportunities this young stallion presents are endless.